Beverly Hills crash: The reason alleged L-plate driver Jordan Maaka did not show up for court 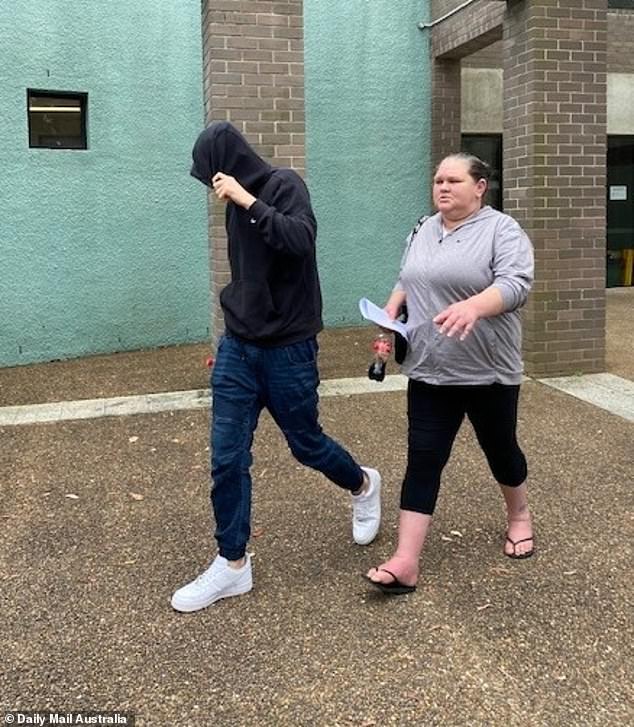 A student driver who allegedly plowed his car into a utility pole, injuring four passengers, missed a court hearing because he was still in hospital, his lawyer said.

Jordan Tye Maaka, 18, was set to appear in Sutherland court Monday on a number of charges after he reportedly lost control of the wheel and crashed his Honda Accord on Stoney Creek Road, Beverly Hills, in southern Sydney, around 6 o’clock on Friday.

An arrest warrant was issued after he failed to attend the hearing, and the case was moved to the same court on Tuesday.

Maaka arrived late in a black hoodie, jeans and white Nike sneakers, and was flanked by several supporters.

Inside the court, Maaka seemed nervous as he sat in the front row sipping a bottle of Coca-Cola.

Maaka’s lawyer Imad El-Fawal told the court he had missed the previous hearing because he was still being treated at Liverpool hospital, where he was admitted for minor injuries after the crash.

“We have received instructions that my client was still in hospital,” said Mr El-Fawal.

“The hospital forwarded the report, but it was not sent to the court.”

Magistrate Donnelly accepted Mr El-Fawal’s request for a stay and re-established the case to reappear in court on October 5.

Outside the court, a male member of Maaka’s entourage lashed out at reporters, calling them name names and threatening violence.

Maaka, 18, (pictured) has been charged after allegedly crashing into a car in south-west Sydney on Friday morning

He was released on bail on Sunday in Parramatta’s local court, after learning that the teen was allegedly behind the wheel while his driver’s license was suspended for unpaid fines.

The court heard that Maaka had suffered several injuries in the crash, including a broken arm, but his arm did not appear to be in a sling on Tuesday.

The four passengers – two girls aged 16 and two boys aged 15 and 16 – were treated at the scene before being taken to hospital, each in stable condition. All have since been fired.

Just hours after the crash, a friend of Maaka’s shared photos on Facebook taken by a news outlet showing the wreckage, along with the caption: ‘s**t mayne’ – a slang term for ‘man’.

In the comments, another mate, Maaka, who is facing a series of charges, assured that all would be well. “You’re growing up,” he said.

The incident has shocked community members with the deaths of five teenagers in an eerily similar crash in Buxton, southwest of Sydney, just ten days earlier.

Many have flocked online to express their disappointment that Buxton’s tragedy failed to remind young people of the dangers and responsibilities that come with getting behind the wheel.

Five teenagers were taken to hospital with injuries as a result of the crash. Pictured is the Honda Accord on site

Pictured: Police officers and firefighters at the Beverly Hills accident scene on Friday

Maaka and his supporters, a woman and a man, and his lawyer get together outside the court

“Five families mourn the loss of their child who was murdered in Buxton a week ago,” said one woman.

“This could easily have been another five families mourning the loss of their loved ones.”

The same friend who posted images of the wreckage had also shared a news story about the fatal Buxton crash days earlier.

In a Facebook post from last year, Maaka shared a photo of him blowing out a large cloud of smoke, referring to himself as an “eshay” — describing an urban youth subculture associated with foul language, defiance and eccentric dress.

The post of a friend of the ‘eshay’ L-plate driver who allegedly plowed his car into a pole and injured four teenagers, with the photos captioned ‘S**t mayne’ – which is slang for ‘man’

In a Facebook post (photo), Maaka shared an image of him blowing out a cloud of smoke

In comments posted online, Maaka said his name is “lobob” and called himself an “eshay.”

It is unclear what exactly Maaka’s answer means.

On Friday, witnesses told Daily Mail Australia that the alleged driver was wandering, dazed and agitated.

The two female passengers were lying on the sidewalk next to the car, one unable to speak while the other screamed with a bleeding gash on her neck.

Glen Norrish, who lives in the house where the car crashed, said he was awakened by an “omnipotent bang” just after 5:30 a.m. and wandered out to find the alleged driver, the two injured girls and another young man at his mailbox. leaning against the fence with bleeding leg.

Mr Norrish said another young man was trapped in the middle of the back seat.

“The car was smoking, I was ready to get the fire extinguisher,” he said.

“One had quite a cut on her neck, the other just lay there and I kept saying ‘keep your eyes open,’” he said.

“This is a bad stretch of road, but there was (I think) speed involved.

“The girl with the cut on her neck that screamed, I think she hurt her neck too.

“The damage to that fence, they went hard.”

Under the terms of Maaka’s bail, he cannot leave the house unless with his mother, goes to work or returns from work.

He is also not allowed to occupy the driver’s seat of a motor vehicle and must report to the front door of his bail address in Warwick Farm at the request of the police.

Friends gather at the crime scene in Buxton, southwest Sydney, where five Picton High School classmates aged 14-16 were killed in a horror crash on September 6.

NSW Police Assistant Commissioner Brett McFadden said there were uncanny similarities between the Beverly Hills crash and the Buxton crash.

Tyrell Edwards, 18, faces five dangerous driving charges after his five passengers were killed in the high-speed crash on the night of September 6.

The three girls and two boys who died in the accident were all friends from Picton High School.

Antonio Desisto, Tyrese Bechard, Summer Williams, Lily Van De Putte and Gabriella McLennan – all aged between 14 and 16 – died when a Nissan Navara ute went off the road in Buxton.