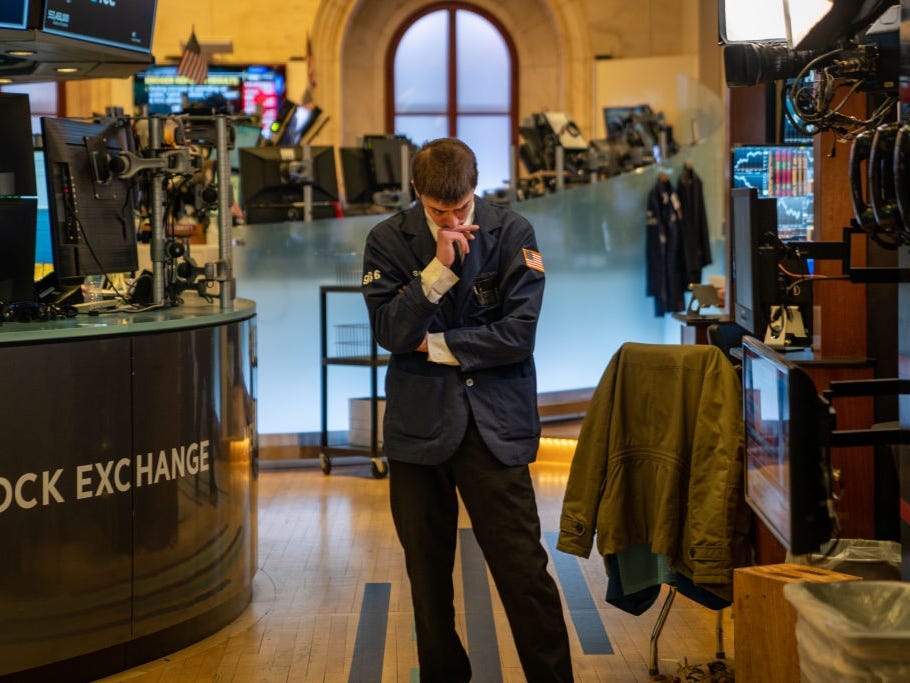 US stocks fell Thursday as data showed inflation-adjusted personal spending fell for the first time this year.
Year to date, the S&P 500 is down roughly 21%, marking its worst first half since 1970.
Meanwhile, analysts said Bed Bath & Beyond stock could fall another 50%.

US stocks declined on the final trading day of a rough second quarter, as new data showed inflation-adjusted personal spending fell for the first time this year.

US personal consumption expenditures rose 0.6% in May from a month ago, and was up 6.3% from a year ago. But purchases of goods and services adjusted for inflation decreased 0.4%.

The combination of soaring inflation, geopolitical conflict, Fed rate hikes, and ongoing pandemic snags have made for volatile and uncertain markets. Year to date, the S&P 500 is down roughly 21%, marking its worst first half since 1970. The Dow Jones Industrial Average is down more than 16%, and the tech-heavy Nasdaq is down about 25%.

Here’s where US indexes stood as the market closed 4:00 p.m. on Thursday:

Analysts said Bed Bath & Beyond stock has another 50% to fall, and that its “dumpster fire” first quarter means its days could be numbered.

“It’s not going to take years,” Loop Capital analyst Anthony Chukumba said. “We could be talking about months at this point. We are in the end days.”

The US dollar has retained its dominance in 2022, but China’s yuan has gained among global currency reserves this year. The yuan’s share was 2.9% in the first quarter, up from 2.5% a year ago.

Meanwhile, RBC’s commodities chief said oil prices could be set to rise further, as OPEC lacks additional supplies. Additionally, prices could be exacerbated by pressures in China, where demand is rising as COVID lockdowns ease.

But with G7 leaders weighing a Russian oil price cap, a top Moscow official warned that the move would “disbalance” the market and send crude prices soaring.

Separately, Russian President Putin said the West is to blame for soaring global food prices. He added that Moscow is not blocking Ukrainian grain exports, but is instead guaranteeing the safety of shipping out of Ukraine ports.

Wife of doctor accused of driving his Tesla off a cliff with his family inside shouted to rescuers ‘he intentionally drove the car over’ edge, DA alleges