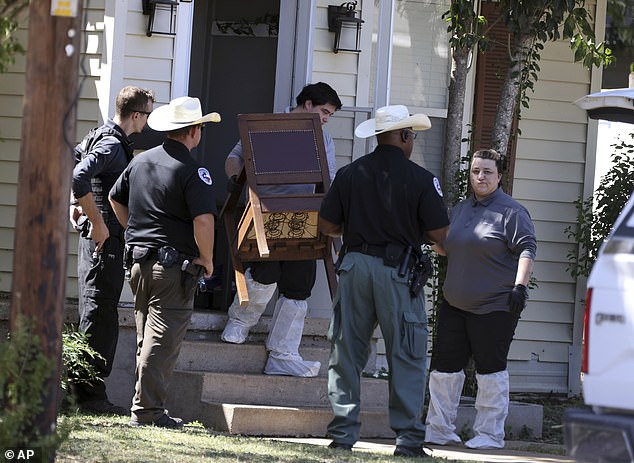 A Texas man kills his wife, two children and two others, including a woman found on the street in a residential neighborhood, before being shot by police

Five people killed in shooting in McGregor, Texas
Police were initially called to the scene around 8 a.m. Thursday for a “domestic disturbance.”
Upon arrival, officers located two women nearby who had been shot to death.
The man suspected in this incident was shot by police and taken to hospital for his unspecified injuries.
The suspect was later released into police custody.

By Hope Sloop for Dailymail.Com

A man is in police custody after allegedly killing five people, including his wife and two children, authorities said Thursday.

The shooting occurred in McGregor, Texas, a city located just outside of Waco.

Two other victims were also found nearby, according to reports. The body of a woman was located in the street near the house where three of the victims were found, while another was found dead inside another house.

Top Law Enforcement officials spoke to KWTXtelling the local news station that they were called to the scene of the 900 block of Monroe Street around 8 a.m.

The five victims were not named or identified in any way, as police are still in the process of notifying family members.

“This is sad information to have to post, and to stand up and give you thoughts, prayers and hope today for a successful healing for the McGregor community,” said Sgt. Ryan Howard with DPS said during a news conference Thursday afternoon.

“We have learned an update on the case, and currently working on this case we have five people who are confirmed deceased from the incident that occurred this morning.”

Police reportedly shot the gunman and he was taken to hospital, where he is in police custody, but officials did not share the status of his injuries.

The Texas Department of Public Safety confirmed to Fox 44 they have been brought in to investigate the officer-involved shooting as well as multiple deaths.

The Texas Rangers are also involved in the investigations at this time.

A ‘heavy police presence’ remains on the scene in a residential neighborhood, as officers and law enforcement investigate.

The reasoning behind the carnage is unknown.

Evidence collected near home involved in shooting that left 5 dead in McGregor, Texas

The district was briefly closed following reports of unrest in the city.

The schools were placed in a ‘safe environment’ from 8am Thursday until noon.

“There was a domestic disturbance that resulted in a shooting at McGregor this morning. As a result of that shooting, MISD ‘locked down’ for about 15 minutes. Once we received a go-ahead from MPD, the lockdown was lifted,” the McGregor ISD superintendent said in a statement.

‘This is a very fluid situation. Details are coming in quickly and the gravity of the situation and the response required will change many times before the day is out. We will update you throughout the day as appropriate,” the superintendent said, according to a KWTX report.

Sergeant Ryan Howard with Texas DPS said the matter remains under investigation at this time.

‘Please be assured that the mental and physical well-being of every student and staff member is our top priority. We will be here today, and in the days to come, to meet the needs of our children.’

DailyMail.com has reached out to officials with the Texas Department of Public Safety for further comment on the investigation, but has not received a response at the time of publication.

This is a developing story. Please check back for updates as we receive them.