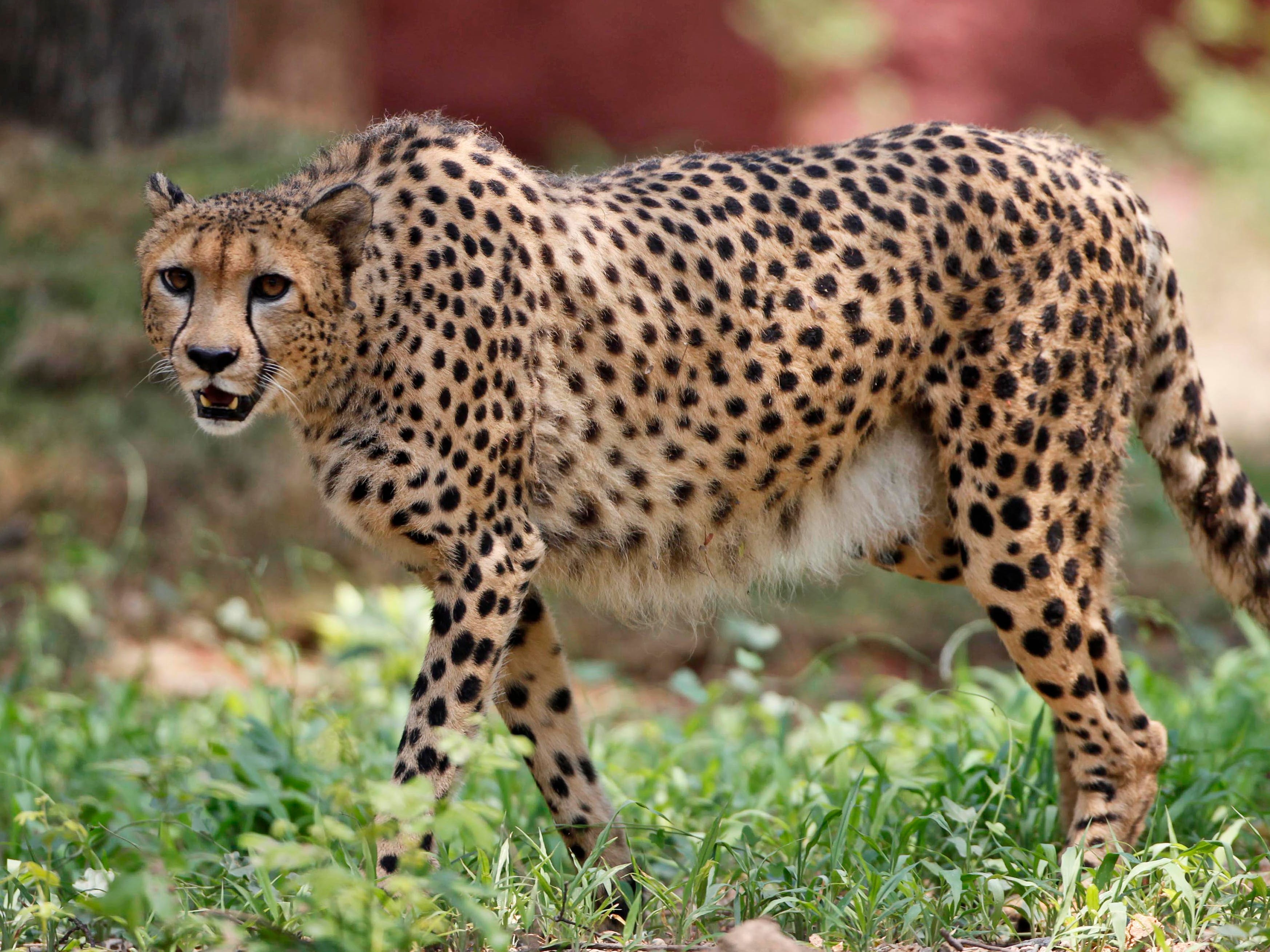 A male African Cheetah named Dark is released at his enclosure at the Nehru Zoological Park in Hyderabad, India, Saturday, May 12, 2012.

Cheetahs are being reintroduced to India after being declared extinct in the country in 1952.
The reintroduction effort is aimed at creating a viable population of wild cheetahs.
Some experts are critical of the plan, saying it’s more like a large “zoo” than a wild population.

In mid-September, eight African cheetahs were airlifted from Namibia and brought to India, marking the first time the big cat stepped foot in the wild in the country since being declared extinct more than 70 years ago.

The reintroduction, which was years in the making, was celebrated by Prime Minister Narendra Modi, on whose 72nd birthday the cats arrived, as well as by other cheetah advocates and scientists.

“When the cheetah will run again … grasslands will be restored, biodiversity will increase and eco-tourism will get a boost,” Modi, who released the cats into their temporary enclosure, said, adding: “Along with these cheetahs, the nature-loving consciousness of India has also awakened with full force.”

However, some big-cat experts told Insider while they support the idea of reintroducing wild, free-ranging cheetahs to India, the current effort seems more like a marketing stunt — one that’s not sufficiently based in science.

Cheetahs, the world’s fastest land animal, were once widespread in India. They were declared extinct in the country in 1952 as a result of hunting and habitat loss.

“It is the only large mammal that India has lost,” S.P. Yadav, secretary of India’s National Tiger Conservation Authority, said, according to The New York Times. “It is our moral and ethical responsibility to bring them back.”

Cheetah populations worldwide are also on the decline, with the total number in the wild estimated to be about 6,500, according to the International Union for Conservation of Nature. The big cats now occupy just 9% of their historical range. The vast majority of the remaining cheetahs are in Africa, while a small amount of the critically endangered Asiatic cheetahs, the same subspecies that used to prowl India, remain in Iran.

“To save cheetahs from extinction, we need to create permanent places for them on Earth. India has areas of grassland and forest habitat, which are appropriate for this species,” Laurie Marker, founder of the Cheetah Conservation Fund, which has helped coordinate the reintroduction, told The Washington Post.

The relocated cheetahs include five females and two males between the ages of two and six. The eight cheetahs were dropped off at Kuno National Park, south of New Delhi, where they are being quarantined and observed. The plan is to release the cheetahs into the larger national park, where they can prey on animals like deer and antelope, within a matter of months.

The reintroduction plan, which is estimated to cost about $11 million, aims to establish a viable, free-ranging population of cheetahs. The plan involves ultimately relocating around 50 cheetahs to the country in the coming years.

Indian Prime Minister Narendra Modi watching a cheetah after it was released in an enclosure at Kuno National Park, in the central Indian state of Madhya Pradesh, Saturday, Sept. 17, 2022.

A ‘larger version of a zoo’

There are major challenges with reintroducing a large predator to an ecosystem it has been absent from for decades. The cheetahs could face conflict and competition for food with other predators, like leopards, and there may not be enough natural prey to sustain the planned population size.

Arjun M. Gopalaswamy, a wildlife and statistical ecologist who researches big cat and large mammal ecology, told Insider that as the plan currently stands, there’s not enough space for the cheetahs.

Gopalaswamy noted a paper he published in the journal Ecography in 2020 that found the density of a cheetah population, or the number of cheetahs per the amount of space, to be one per 100 sq km. The amount of space set aside for India’s cheetahs is 750 sq km. With those numbers, the area would be large enough for only 7-8 cheetahs, not the dozens that are planned.

“This simply means that the Cheetah Introduction Action Plan has overestimated the number of cheetahs India’s reserves can hold by several fold,” Gopalaswamy, who is the founder and chief scientist of Carnassials Global, which provides science consulting to governments and NGOs, said.

He added that he supports reintroduction efforts, but that the current plan in India “appears to rely almost completely on the cheetahs and their charisma” and that instead, he would like to see “a fully science-based approach.”

K. Ullas Karanth, the emeritus director of the Bangalore-based Centre for Wildlife Studies, agreed that the current plan was not grounded in science and told Insider it “will not lead to a restoration of a viable population of wild cheetahs, sustaining itself naturally in the long run.”

Karanth said the population would be augmented by bringing in additional cheetahs and other animals in order to boost the supply of available prey. Such a system, he said, “cannot be called reintroduction at all.”

“That would be simply a captive population of cheetahs in a larger version of a zoo,” he said, calling it “largely a gimmick and a colossal waste of money.”

Karanth noted that cheetahs have naturally low reproduction rates and even in the best habitats in Africa the vast majority of cheetahs die before reaching breeding age. He said in India the cheetahs will face denser populations of humans and livestock, dogs, and predators like leopards, making their survival even more challenging.

“I think the Indian bureaucracy and the ‘foreign experts’ have sold a ‘creaky used car’ to the gullible Indian public, media, and political leadership,” Karanth said.

Some conservationists have also noted that effort would be better spent trying to first save cheetah populations where they are already established but on the decline, before focusing on reintroduction.

Still, proponents of the project are optimistic. Yadvendradev V. Jhala, dean of the Wildlife Institute of India and the lead scientist of the reintroduction effort, pointed to the success India has had in boosting other big cat populations, such as tigers.

“The cheetah is a magnificent animal, it’s a big magnet for ecotourism,” Jhala told National Geographic. “If you bring in cheetah, the government will put funds into rehabilitating and rewilding these systems, and all the biodiversity will thrive.”

Marker, the founder of the Cheetah Conservation Fund, believes that despite potential challenges, she believes the big cats can adapt, noting her group has spent 12 years consulting with the Indian government on how to reintoduce the cheetahs.

“Cheetahs are very adaptable and [I’m] assuming that they will adapt well into this environment,” she told AFP. “So I don’t have a lot of worries.”

Have a news tip? Contact this reporter at kvlamis@insider.com.