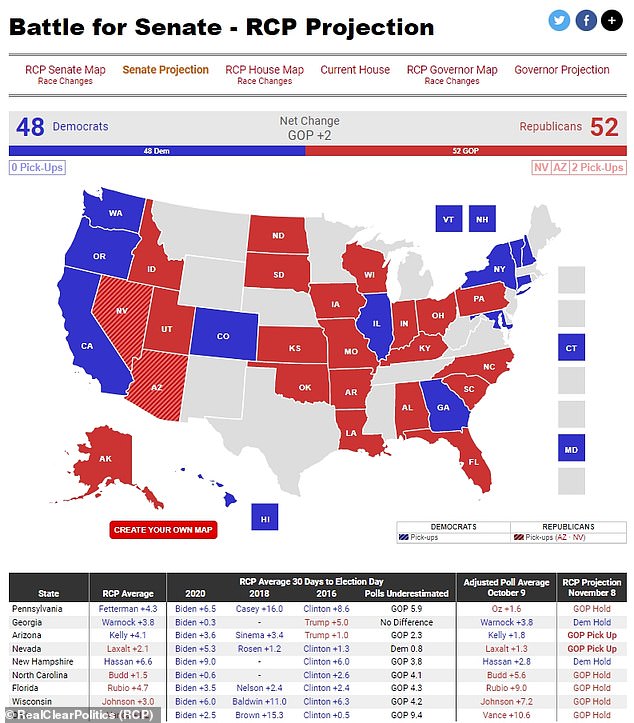 Republicans could pick up two senate seats in Arizona and Nevada: Forecasts show GOP with 52-48 upper chamber majority after 2022 midterms

A RealClearPolitics projection shows the US Senate going red with a 52-48 majority in the 2022 midterm elections
The projection shows Trump-backed Republican Adam Laxalt defeating incumbent Democratic Senator Cathy Cortez Mastro in Nevada
Also shows Republican Blake Masters, who is also backed by Trump, defeats Arizona Senator Mark Kelly in the 2022 midterm elections
There are 35 states with Senate races in November — and 10 are toss-ups

Republicans in the Senate are on track to win two seats in the western United States during the 2022 midterm elections to regain a majority in the Senate, according to a forecast 30 days until Election Day.

Blake Masters Could Beat Arizona Democratic Senator Mark Kelly RealClearPolitics projection shows, despite the incumbent having an average poll advantage of 1.8 percent over its GOP challenger in October’s adjusted numbers.

The projection also estimates Republican Adam Laxalt will defeat Democratic Senator Catherine Cortez Masto in Nevada in November. Laxalt has an average poll advantage of 1.3 percent over the incumbent senator in the month leading up to the midterm elections.

Donald Trump held back-to-back rallies in Nevada and Arizona on Friday and Saturday in an ongoing effort to propel his GOP picks to Congress in the midterm elections. He endorsed both Masters and Laxalt in their respective primaries.

If Masters and Laxalt relieve Democratic senators from what they’re up against, the Senate could go red with a 52-48 majority — causing Congress to block many of President Joe Biden’s legislative initiatives in the second half of his term.

There are 35 Senate seats up for election in the 2022 midterms, and 10 are either a toss-up or a leaning Democrat or Republican, according to the Cook Political Report.

The Senate 50-50 split has given Democrats the smallest possible majority for the past two years, with Vice President Kamala Harris holding the decisive vote.

This year’s flip-flops include races in the battlefields of Pennsylvania and Wisconsin, which are expected to remain red. Also in Georgia, which is expected to remain blue with Democratic incumbent Senator Raphael Warnock expected to defeat his embattled Republican challenger and former NFL star Herschel Walker.

Fetterman and Oz face off to take the seat of outgoing Republican Senator Pat Toomey in Keystone State.

Both Nevada and Arizona dropped their Electoral College votes to Biden in the 2020 presidential election.

Nevada also voted blue for Hillary Clinton in 2016, but Arizona, a southern border state, voted for Trump in its first bid for the White House.

Florida, North Carolina and Ohio are leaning red in the 2022 Senate races, and Arizona, Colorado and New Hampshire are all leaning blue.