Supreme Court’s conservative majority seems open to eliminating affirmative action in university admissions process: ‘Why do you have these boxes?’ 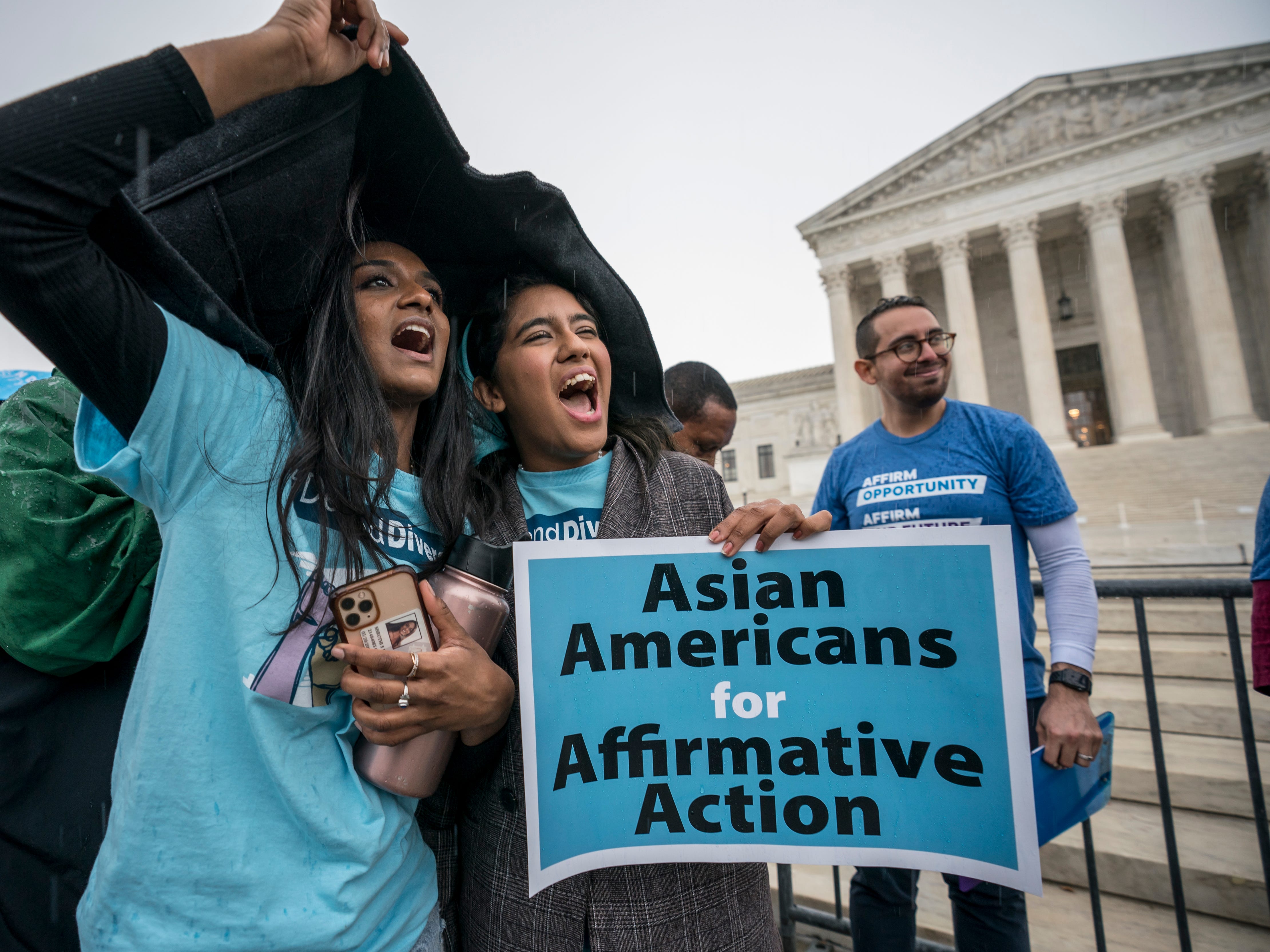 Harvard students Shruthi Kumar, left, and Muskaan Arshad, join a rally with other activists as the Supreme Court hears oral arguments on a pair of cases that could decide the future of affirmative action in college admissions on Monday, Oct. 31, 2022.

The Supreme Court’s conservative justices appeared open to eliminating race as a factor in university admissions processes as they heard two high-profile challenges against Harvard College and the University of North Carolina Chapel Hill on Monday.

During nearly five hours of oral arguments, the court’s six Republican appointees expressed skepticism over the constitutionality of race in the university admissions process, whereas the three liberal justices defended the policies, widely referred to as affirmative action, that have long been used by American colleges to improve diversity in higher education.

Students for Fair Admissions, a nonprofit led by conservative activist and affirmative-action opponent Edward Blum, claimed that Harvard and UNC discriminated against Asian applicants and white and Asian applicants, respectively, by considering race in their admissions processes and by giving unfair “racial preference” to Black, Hispanic and Native American applicants.

Specifically, SFFA declared that Harvard violated Title VI of the 1964 Civil Rights Act, which prohibits private institutions that receive federal funding from discriminating on the basis of race, and that UNC violated Title VI and the Constitution’s equal protection clause.

The colleges denied the allegations, saying that race plays only a limited role in their “holistic” admissions processes and that it’s not used to advantage one group over another. The lower courts sided with the schools, prompting SFFA to turn to the nation’s highest court.

Should the court side with SFFA, it would roll back nearly four decades of precedent that has upheld affirmative-action policies in higher education. Advocates fear that such an outcome would have devastating effects on people of color, leading to declining university enrollment rates and reduced workforce participation in the public and private sectors.

Decisions in the cases are expected by June. Here are five key moments from the oral arguments:

Thomas questions the meaning of ‘diversity’

Justice Clarence Thomas, the court’s longest-serving member and often considered its most conservative, questioned the meaning of “diversity” as it was repeatedly brought up in defense of affirmative action.

“I’ve heard the word diversity quite a few times and I don’t have a clue what it means. It seems to mean everything for everyone,” Thomas asked North Carolina’s solicitor general Ryan Park, who represented the University of North Carolina.

Thomas, the second Black person to ever serve on the bench, has long been critical of race-conscious admissions policies. He dissented in Grutter v. Bollinger, the landmark decision handed down nearly 20 years ago that upheld affirmative action in higher education, and that SFFA is currently asking the Supreme Court to overturn.

Two of the conservative justices repeatedly asked if, and when, there could be an end to race-conscious admissions policies, as the divisive issue has made its way to the Supreme Court several times over the years.

“How do you know when you’re done?” Justice Amy Coney Barrett asked Park.

Justice Brett Kavanaugh raised similar concerns, asking US Solicitor General Elizabeth Prelogar, who argued in favor of the colleges, “How will we know when the time has come?”

The timing was mentioned in reference to Grutter, in which then-Justice Sandra Day O’Connor suggested that “25 years from now, the use of racial preferences will no longer be necessary.”

Prelogar argued that race-conscious policies should stay in place so long as progress toward diversity remains ongoing on college campuses.

“Universities are under a constant obligation to evaluate their policies. They cannot adopt race-conscious admissions and sit back reflexively and let that play out forever into the future,” Prelogar said. “Instead, they need to continuously re-evaluate whether progress has been made such that they can use race-neutral alternatives to achieve the same goals.”

Alito wonders why the consideration of race matters

Justice Samuel Alito wondered how and why universities consider race as part of their admissions processes.

“Why do you have these boxes?” Alito asked. “Why do you give a student the opportunity to say this one thing about me: ‘I’m Hispanic, I’m African American, I’m Asian?’ What does that in itself tell you?”

The conservative justice suggested that applicants hailing from different countries in Asia have little in common, but could both theoretically check the box that reads “Asian.”

Alito also compared affirmative action efforts to a 100-yard dash, saying that minority applicants get to “start five yards closer to the finish line” over other applicants.

UNC and Harvard rejected such assertions, repeatedly saying that race is just one of among a slew of factors under consideration in their admissions processes, and that race itself does not award a “plus” or advantage to an applicant, nor automatically guarantees their admission.

The court’s liberal wing highlighted the importance of diversity in higher education and beyond, and warned about the potential consequences of ending race as a component of university admissions.

“Part of what it meant to be an American and to believe in American pluralism is that actually our institutions, you know, are reflective of who we are as a people in all our variety,” Justice Elena Kagan said.

Justice Sonia Sotomayor repeatedly noted that universities consider a wide range of factors besides race in their admissions processes.

If precedent were overruled, she said, “we’re reducing underrepresented minorities, we are depriving others who are not there of the benefits of diversity, and we are doing all this because race is one factor among many that is never solely determinative. Seems like a lot to ask.”

Justice Ketanji Brown Jackson, the court’s newest member and its first Black woman, brought up a hypothetical in which excluding the consideration race from the admissions process could be unlawful. She mentioned two students whose families had been in North Carolina for generations and sought to emphasize their backgrounds in their applications to the public university.

“As I understand your no-race-conscious admissions rule, these two applicants would have a dramatically different opportunity to tell their family stories and to have them count,” Jackson told attorney Patrick Strawbridge, who represented SFFA. “The first applicant would be able to have his family background considered and valued by the institution as part of its consideration of whether or not to admit him, while the second one wouldn’t be able to because his story is in many ways bound up with his race and with the race of his ancestors.”

Prelogar, on behalf of the Biden administration’s DOJ, supported both of the universities’ positions by stating that the federal government has a national security interest in protecting diversity within the armed forces.

“A blanket ban on race-conscious admissions would cause racial diversity to plummet,” Prelogar said. “The negative consequences would have reverberations throughout just about every important institution in America.”

The military would “suffer” without a diverse officer corps, she continued. “At present, it’s not possible to achieve that diversity without race-conscious admissions, including at the nation’s service academies.”