Tragedy struck around the globe. Mass casualty events in South Korea, India, and Somalia left nearly 400 dead this past weekend. 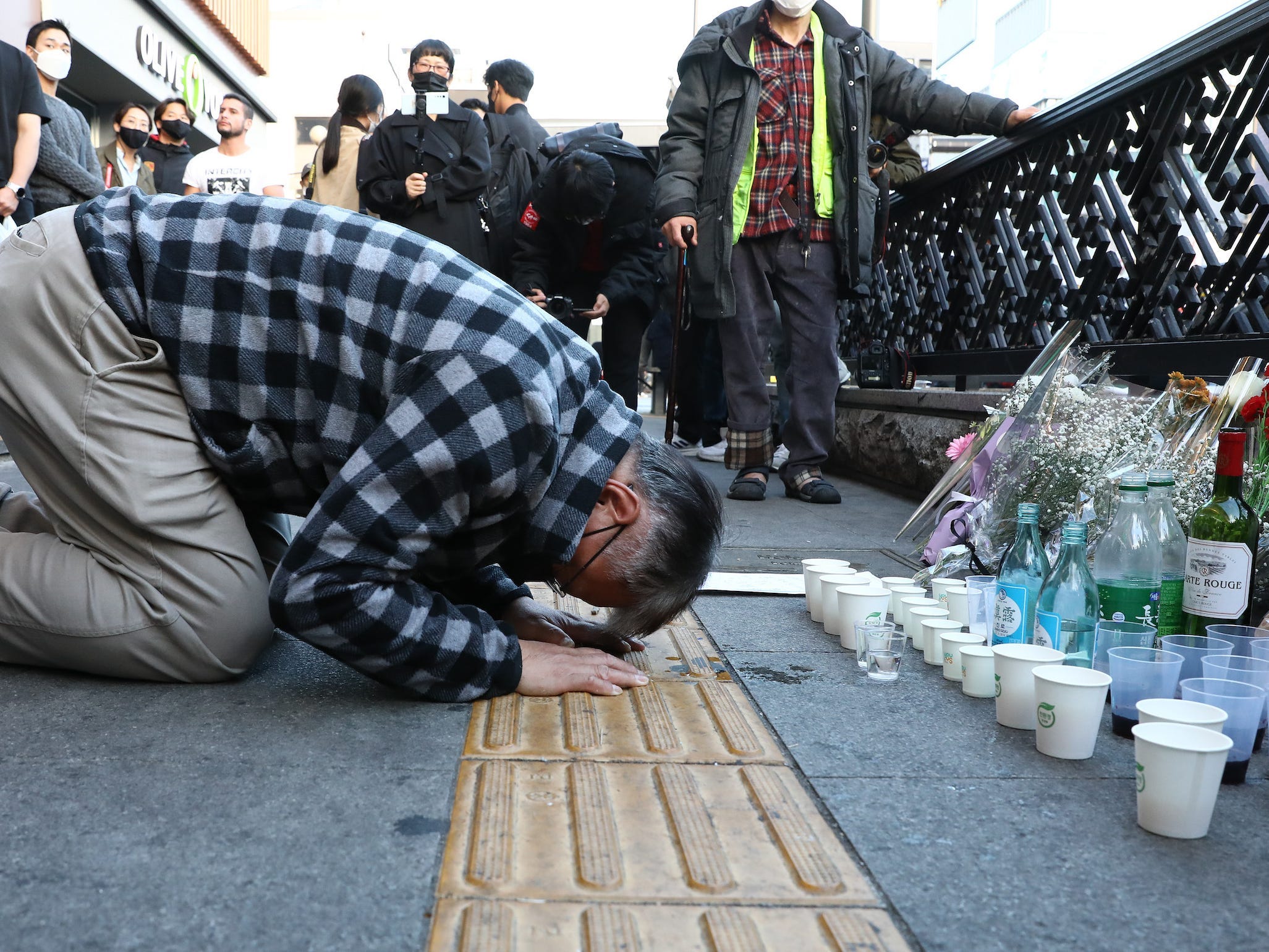 A man bows as he mourns at the street of a deadly stampede during a Halloween festival on October 30, 2022 in Seoul, South Korea.

Nearly 400 people were left dead over the weekend in mass casualty events from around the globe.
Hundreds were killed in a crowd crush in South Korea, a bridge collapse in India, and a car bombing in Somalia.
People were left mourning the loss of family and friends who were killed in the horrific incidents.

People around the world were left reeling with grief after unexpected sequential mass casualty events took the lives of hundreds of people over the weekend.Members of India’s Youth Congress take part in a candlelight march in New Delhi on October 31, 2022, to pay homage to the victims who died after a bridge across the river Machchhu collapsed at Morbi in India’s Gujarat state.

At least 156 people were left dead and dozens more injured in the crowd surge early Sunday in the Itaewon-dong district of Seoul, where approximately 100,000 people gathered to enjoy its popular nightlife scene.

The tragedy marks one of the worst to happen in South Korea since the Sewol ferry sank off the country’s southwestern coast in 2014, taking the lives of 250 South Korean students.

Hundreds of first responders arrived at the scene to help victims who were crushed in the stampede. South Korean officials said state authorities had no safety plans in place to deal with the mass crowds that gathered during Halloween weekend.

“There have been no safety management guidelines or manuals for events without an organizer,” said Kim Seong-ho, head of the disaster and safety management headquarters of the Ministry of the Interior and Safety, local newspaper The Hankyoreh reported.

Survivors of the crowd crush described being lifted off the ground in the chaos as cries for help came from above and below them.Rescue workers carry a victim on the street near the scene in Seoul, South Korea, Sunday, Oct. 30, 2022.

Harrowing video and pictures captured a scene “completely out of control,” witnesses told the BBC, as medics rushed to help people who were caught in the chaos.

Juliana Santaella, a medical student from Mexico who was in the crowd surge, told The Washington Post that she was caught in the extremely busy alleyway around 10 p.m. local time when she started to feel squeezed by the crowd.

“At some point, my feet weren’t even touching the ground anymore,” she told The Post. “There was an unconscious guy on top of me, which was affecting my breathing.”

She recalled feeling crushed under the weight of people in the crowd, even to the point that she was only able to able to move her neck freely after getting stuck between people beside her and below her.

“I thought, ‘Okay, I’m going to be next.’ I really thought I was going to die,” she told The Post. “I was completely paralyzed. At some point, I couldn’t feel my legs. I couldn’t even move my toes.”

A mother of a victim who was killed in the crowd crush said her 19-year-old daughter was “under a pile of people for over an hour,” and that her daughter’s boyfriend “tried to pull her out, but couldn’t,” citing a report by Yonhap News Agency.

The country was left mourning friends and family who were killed on what was meant to be a festive occasion.People pay tribute at memorial altar for the victims of the Halloween celebration stampede, in front of City Hall on October 31, 2022 in Seoul, South Korea.

Of the more than 150 people who died in the Saturday crowd crush in Itaewon, at least 26 were foreign nationals. Officials said most victims were in their 20s to 30s, with more women among the deceased than men, according to BBC.

Tributes to the victims are slowly pouring out as family and friends work to identify their loved ones among the victims. The country’s Education and Defence ministries said among those killed were students studying in Seoul, some teachers, and members of the South Korean armed forces.

South Korean actor and singer Lee Jihan, 24, was among those killed, his agency confirmed in a Sunday statement, saying he was a “lovely and warm friend to everyone” and a “bright and pure person who always greeted everyone with a smile.”

A temporary morgue that was set up at a sports facility in the wake of the incident is housing the bodies of some of those killed, Reuters reported.

It has now become a somber lost-and-found center for items recovered from the chaos, filled with hundreds of pairs of shoes and clothing, including a “Happy Halloween” backpack and a Minnie Mouse hairband.

At least 141 people were killed Sunday after a pedestrian bridge collapsed over the Machchhu River in the western Indian state of Gujarat.Search and rescue work is going on as a cable suspension bridge collapsed in Morbi town of western state Gujarat, India, Monday, Oct. 31, 2022.

The 755-foot-long bridge, built during the Victorian area, was packed with people looking to experience the swaying of the four-foot wide bridge as they cross the Machchhu River — a popular tourist attraction that costs about 20 cents.

But what was meant to be a festive reopening of a pedestrian bridge that had just gone under six-month renovation quickly turned to disaster Sunday evening after the suspension cables of the bridge snapped and spilled pedestrians into the river below.

“The scene is rotating in my head, bodies lying here and there, being taken out, everyone shouting, ‘Save me, save me, save me,'” one survivor, Mahesh Bhai, told state media, per The New York Times.

It isn’t the first time that people were killed in infrastructure disasters in India — hundreds have died over the past decade alone. In 2013, police failed to control a crowd on a bridge in the central Indian state of Madhya Pradesh, causing the railing on it to snap, killing more than 100 people.

The government compensated families of the victims, many of whom were children.Relatives of a victim mourn after a cable bridge across the Machchu river collapsed in Morbi town of western state Gujarat, India, Monday, Oct. 31, 2022.

Rescue efforts are still underway for the hundreds of people still missing in the incident, with nearly 200 people recovered alive so far, according to The New York Times.

Many of those who have been found dead thus far were women, the elderly, and children, including schoolchildren and migrant workers on holiday vacation for Diwali, The Times reported.

“All day we could hear ambulance sirens running on deserted roads,” Dilip Barasara, a Morbi resident, told The Washington Post. “They were either carrying the injured to the hospital, or the dead to the crematorium.”

In the hours following the tragedy, Gujarat’s chief minister, Bhupendra Patel announced that families of the dead would be compensated about $4,800 for each victim, and about $600 for those injured, according to The Times report.

Indian police filed homicide charges in the incident against the operators of the bridge and arrested nine people.People prepare to cremate the body of a victim of a pedestrian bridge collapse in Morbi town of western state Gujarat, India, Monday, Oct. 31, 2022.

Ashok Yadav, the regional police chief, said nine people — including two company managers, two ticket takers, two bridge repairmen, and three security guards — had been arrested on charges of attempting to commit culpable homicide and of causing death by negligence, according to The Times.

Culpable homicide charges are similar to counts of manslaughter in the US legal system.

Oreva, the contractor that had just wrapped up a six-month renovation of the bridge last week, has been under scrutiny by local authorities.

But the company has not been mentioned in legal complaints filed by police, which refers charges against “the agency responsible for maintaining the bridge” and the “management agency,” The Washington Post reported.

Two car bombings near Somalia’s education ministry on Saturday left at least 100 people dead and hundreds more injured.Relatives wait for bodies to be removed from the destruction at the scene, a day after a double car bomb attack at a busy junction in Mogadishu, Somalia, Sunday, Oct. 30, 2022.

The first bomb detonated around 2 p.m. local time on Saturday, with the second exploding after first responders arrived and bystanders approached to help victims of the first blast.

Islamist group al Shabaab, which has been linked to al Qaeda, claimed responsibility for the attack, accusing the education ministry of waging a “war on minds” of Somali children using a Christian-based syllabus.

The attack on Sunday was the country’s deadliest since a truck bombing in the same intersection five years earlier, which left more than 500 dead.Relatives remove a body from the scene, a day after a double car bomb attack at a busy junction in Mogadishu, Somalia Sunday, Oct. 30, 2022.

Mohamud warned that the death toll in the wake of the tragedy could still rise after 300 people were wounded in the back-to-back blasts.

“Our people who were massacred … included mothers with their children in their arms, fathers who had medical conditions, students who were sent to study, businessmen who were struggling with the lives of their families,” the Somali leader said after visiting the scene.

The double car bombings were the deadliest attack in the country since a truck bomb exploded at the same intersection, killing more than 500 people five years earlier in October 2017.