I make up to $800 in tips a day as a bikini barista. Customers can be scary, but I love my job and its perks. 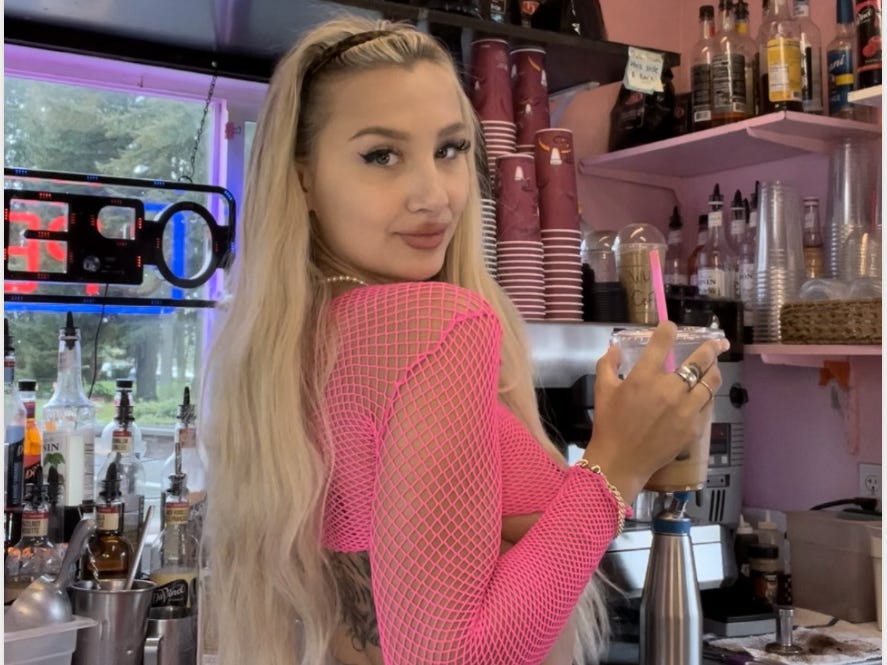 Grace Morris says customers pay for her groceries, vacation, and even rent.

Grace Morris is a 20-year-old bikini barista in Lacey, Washington.
Even though it pays well and she enjoys it, Morris says there’s a dark side to her job.
She’s dealt with everything from lewd comments to stalkers — but doesn’t plan on quitting anytime soon.

This an as-told-to essay based on a conversation with Grace Morris, a 20-year-old bikini barista and TikTok creator in Lacey, Washington.

I used to keep my job a secret. Everyone around Seattle knows what bikini baristas are — there’s a stand on almost every corner. But that doesn’t mean making coffee in your underwear is any less frowned upon.

But the job is worth it to me.

I started working at Pink Sugar Espresso about a year ago, and for the first five months, only two of my friends knew about it.

Morris on a shift inside her coffee stand, Pink Sugar Espresso.

I worked at a regular drive-through coffee shop for a while and hated it; it was always overcrowded, the dress code was strict, and the customers were grouchy.

So, I decided to give bikini barista-ing a shot.

The interview process was with my current manager — she and almost everyone else in charge are all women, which I love. The process was basically a tryout. You have to take off your clothes and have your lingerie ready underneath. They want to see if you can act super bubbly and talk to the customers in your underwear without acting nervous or shy.

You need to have, or at least give off, the confidence of a model; your nails, hair, and makeup have to be runway-ready at all times. We have daily themes so our outfits are coordinated: Military Monday, Topless Tuesday (we wear pasties), Pink Wednesday, and so on.

Our menu is pretty much what you’d find in a regular coffee shop, but our prices are higher. A 16-ounce latte will run you about $7.50. Some customers complain that it’s too expensive, but at the end of the day, you’re not paying for the coffee — you’re paying for great conversation with a beautiful woman.

We always have a line of cars, especially on weekdays during the commuter rush. I’ve had my friends’ dads come to the stand, old teachers, police officers, couples, and even men who belong to a well-known church in the area.

Once, a customer gave me $350 just because I mentioned I was trying to save up for a car.

That was something that really surprised me about the job: Customers have paid for my groceries, furniture, and even my rent. My coworker and I got a full trip to Hawaii, all expenses paid, and another girl got her car payments taken care of. I’ve never done this personally, but I know girls who have sent them Amazon wishlists and gotten everything bought for them. It just depends on what you’re comfortable accepting.

We’re not trying to take advantage of the men who offer us these kinds of perks, but it’s a constant part of the job — they keep offering, whether we accept or decline.

Regulars will come see me every day, bringing food, flowers, or new lingerie. Our customers are mostly men, but I’ve gotten more women coming to see me since I started posting about my job on TikTok back in August. I figured, hey, maybe people would be interested in seeing what being a bikini barista is really like — if my videos flop, I’ll just delete them. My first TikTok reached a million views in about a day.

Now, I have over 338,500 followers and brand deals with some of my favorite clothing brands like Dolls Kill and Pretty Little Thing. It’s given me the chance to tell my side of the story — to show people that all I’m really doing is making coffee and conversation, despite what people might assume. And it’s also allowed me to share some of the downsides.

There’s a false perception that being a bikini barista is a “gateway job” into dancing or sex work.

Not that there’s anything wrong with those jobs — and there are other coffee stands who do engage sexually with clients. So many people assume that all of us do it, but that’s not the case.

A lot of customers ask me to take my top off or offer $20 to make their drink completely naked, and I have to explain to them, “No, we don’t do that here.” People have grabbed my hand and joked about pulling me into their car. I think that a lot of men feel comfortable saying these things when they know no one else is around.

Our stand is very small, about the size of a shed — only one of us works there at a time and there’s not even room for a bathroom. Even though we’re in a safe area, there are definitely times I wish I didn’t work alone.

Stands in Tacoma, about a half-hour drive away, have been robbed at gunpoint. At one of them, a man pulled up just to shoot the girl and drive away, but luckily she had time to shut the window and hit the panic button, which most stands have – it sounds an alarm and alerts the police.

At the end of the day, I know what I’m getting myself into.

My job is to be sexualized, in adult outfits. It is to have conversations that are sometimes uncomfortable. I’m in lingerie around lots of older men who don’t have a filter, so I understand that I’m putting myself in a position that will attract those comments.

That said, the reason I still love my job — other than the pay — is that I have control over what happens. I get to own my sexuality, and if a customer says something disgusting, I can laugh it off and roll my eyes, I can crack a joke, or I can shut it down and tell them they can’t come back.

Being a bikini barista has given me a kind of confidence that I’ve never had before. It teaches you how to handle uncomfortable situations and take control of situations when they’re not going your way, especially with men.

When it comes down to it, a lot of the customers are just lonely and want someone to talk to. We’re great conversationalists, and it keeps customers coming back because they genuinely enjoy us as people.

In some ways, it kind of feels like I’m just working at Starbucks — and honestly, I forget that I’m in my underwear after a while.

The job has an extremely high turnover rate, so girls come and go relatively often, while some women, like my manager, have been doing it for 10 years or more.

I don’t want to be a bikini barista forever. I don’t see it as a sustainable career for myself personally — but the job itself is incredibly easy for the amount of money I’m making, and it’s providing me both financial freedom and a social media niche.

Down the road, I could see myself bartending or content creating full-time. But for now, I’m a bikini barista for the foreseeable future, and I’m perfectly happy about that.

Former VP Mike Pence says he takes ‘full responsibility’ for classified documents found at his Indiana residence: ‘Mistakes were made’

Former VP Mike Pence says he takes ‘full responsibility’ for classified documents found at his Indiana residence: ‘Mistakes were made’