Videos show Ukrainians celebrating with troops and chanting ‘Ukraine above all!’ as Russian forces are driven out of Kherson 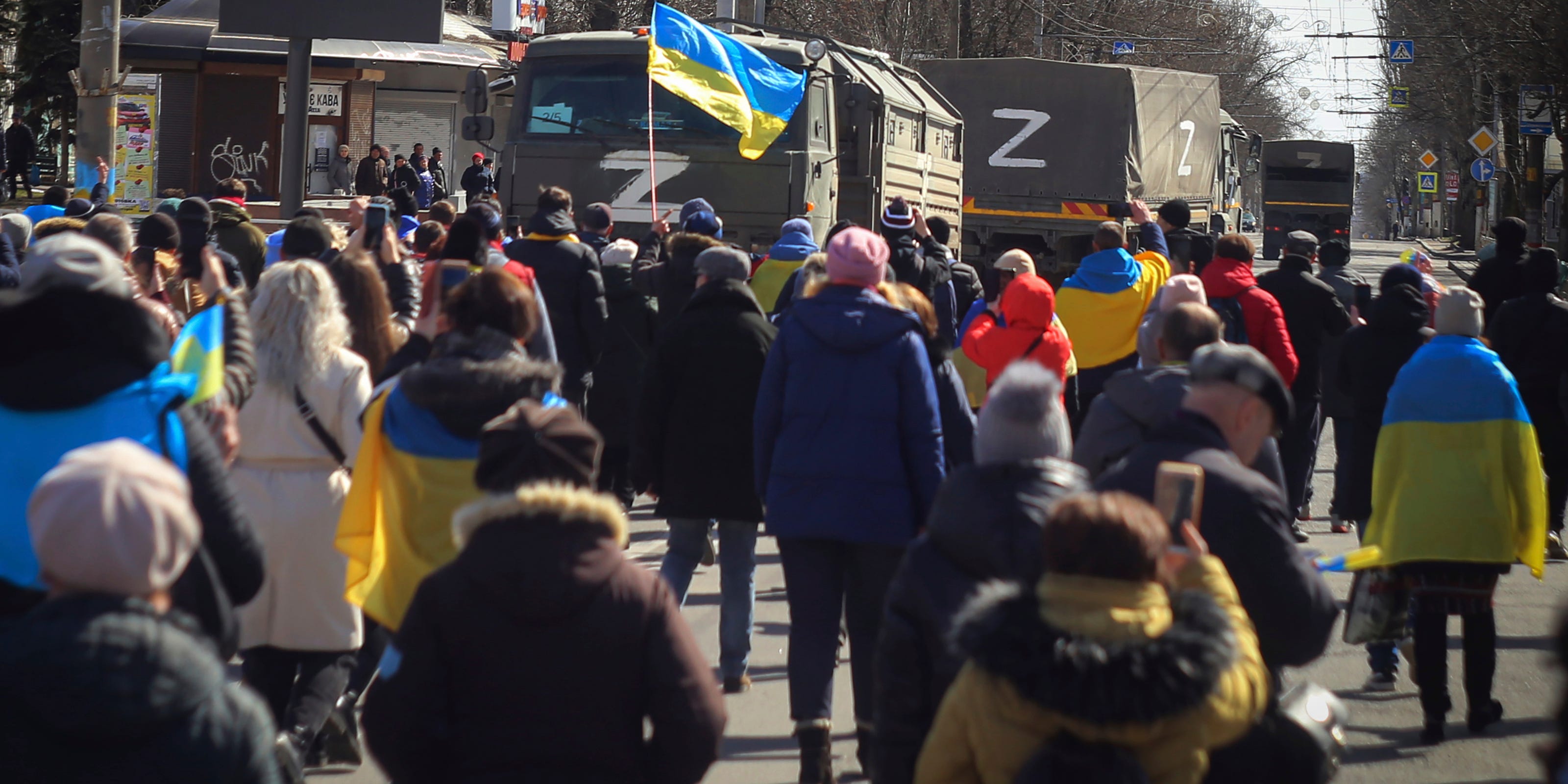 People with Ukrainian flags walk towards Russian army trucks during a rally against the Russian occupation in Kherson, Ukraine, Sunday, March 20, 2022.

Videos show Ukrainian citizens and troops celebrating in the streets following Russia’s retreat in Kherson.
“Kherson is Ukraine! Glory to Ukraine! Glory to the heroes!” crowds holding Ukrainian flags chanted.
On Friday morning, Ukrainian troops entered Kherson, a crucial city that fell to Russia in the early days of the war.

Videos posted to social media show Ukrainian citizens and troops celebrating in Kherson after Russian forces were forced to abandon their positions in the city and retreat across the Dnieper River.

Ukrainian troops entered Kherson Friday morning, a crucial city that fell to Russia in the early days of the war but is being retaken by the Ukrainian armed forces.

“Kherson is returning under the control of Ukraine,” Ukraine’s defense intelligence agency said in a statement, adding that retreat routes were being targeted and that “any attempts to oppose the Armed Forces of Ukraine will be stopped.”

These developments followed a public declaration of retreat by Russian military leaders, specifically Russia’s defense chief Sergei Shoigu and commander of Russian forces in Ukraine Gen. Sergei Surovikin, triggered by major advances on the battlefield by the Ukrainian military.

The group gathered in a town square in Kherson, where Ukrainian flags are now flying high.

In a third video, an even larger crowd is gathered in Kherson, echoing chants of “AFU!”

To celebrate what is fast emerging as a major victory for Ukraine and yet another humiliation for Russia, MP Oleksiy Goncharenko tweeted on Friday: “Ukrainian Army is already in Kherson! Slava Ukraine!” (The expression broadly translates to “glory to Ukraine.”)

Goncharenko added that locals were celebrating the arrival of the military, saying, “they run to hug, give flowers and thank for the release.”

As the Ukrainians celebrated, Russia’s defense ministry said on Friday that its withdrawal from the positions it previously held in the city was complete and that all Russian soldiers and weapons had been taken across the river. The claim has yet to be verified.