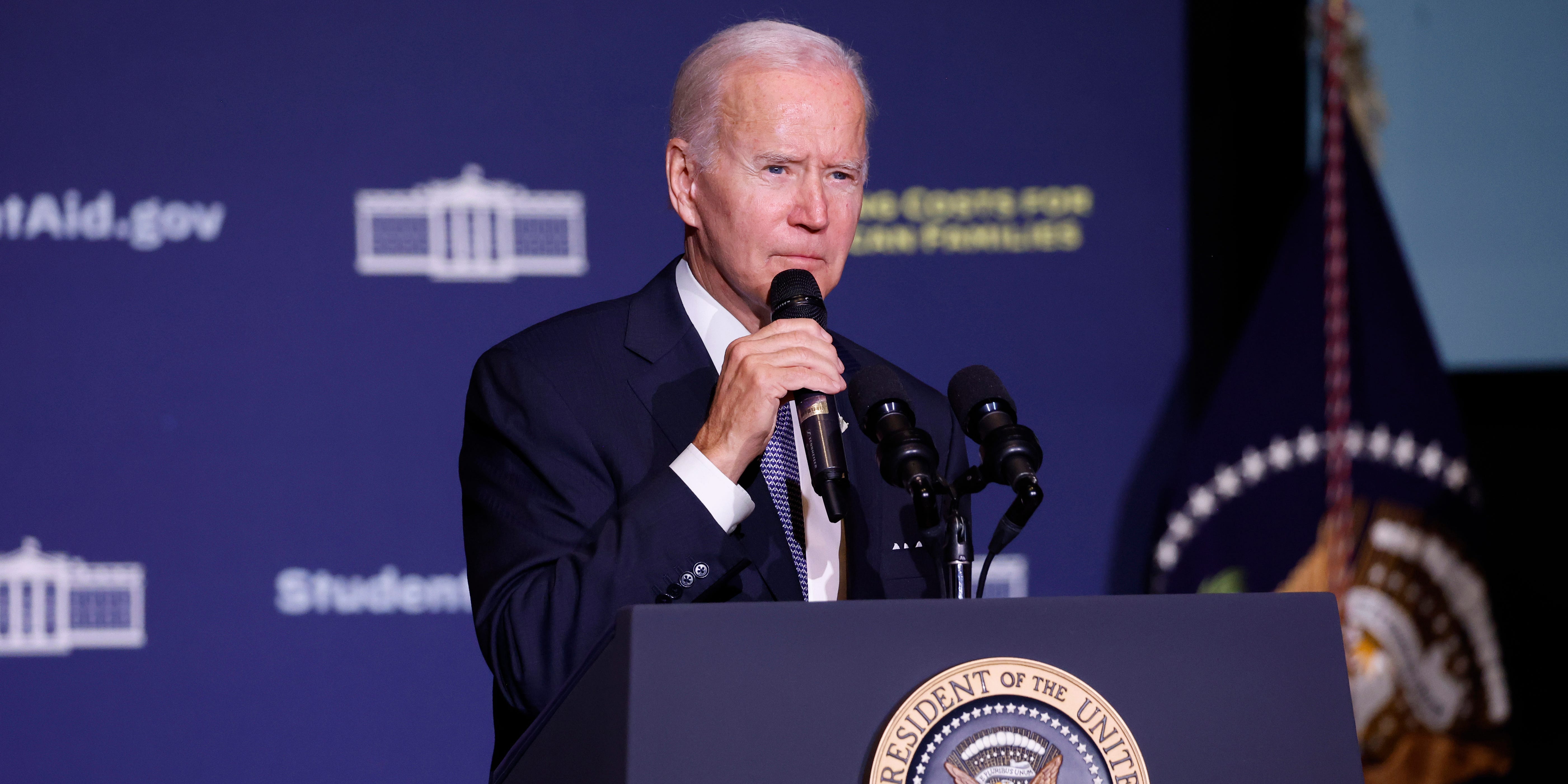 Neither party looks likely to gain a significant majority following the midterm elections.
This means that Biden’s veto power will likely overrule any attempts to block student-debt relief.
Ultimately, federal courts will likely have the final say on whether the relief goes through.

Regardless of the final results, neither Democrats nor Republicans are set to emerge from the midterm elections with a significant majority.

That means that the fate of President Joe Biden’s student-loan forgiveness doesn’t lie in the hands of lawmakers, but rather, the federal courts.

After Biden announced up to $20,000 in student-loan forgiveness for federal borrowers making under $125,000 a year at the end of August, it was no secret the policy would face pushback. For months leading up to the announcement, Republican lawmakers slammed the idea of giving millions of borrowers broad relief, and after it was announced, those lawmakers pledged to do anything they could to stop it from being implemented — including supporting a number of conservative lawsuits that arose seeking to block the debt relief.

But despite Republicans’ hopes of a “red tsunami” in the midterm elections, as the results rolled in it became clear that neither party was going to gain a significant majority, with several key races remaining too close to call and control of both chambers of Congress still uncertain.

So, while the GOP may have hoped to have the votes to roll back student-loan forgiveness or introduce legislation to block it from happening in the future, Biden’s veto power remains — and a two-thirds majority vote to override a veto is out of the picture in the next Congress.

In a speech last week anticipating the midterm results, Biden even said, according to CNN, that it would be a “horrible two years” if Republicans assume control over Congress, but “the good news is I’ll have a veto pen.”

That means that ultimately, regardless of what the GOP might try to accomplish via legislation, the courts will have the final say on whether student-debt relief goes through. There are at least six major conservative lawsuits that have arisen so far seeking to block the relief, which is currently on pause due to a ruling from the 8th Circuit Court of Appeals in response to one of those lawsuits, filed by six Republican-led states who argued loan forgiveness would hurt their states’ tax revenues.

And on Thursday evening, a federal judge in Texas — appointed by former President Donald Trump — struck down the debt relief and ruled it illegal, the most significant legal setback to the loan forgiveness so far.

Other lawsuits are still pending, and the Supreme Court has already dismissed two of them when they were brought to Justice Amy Coney Barrett’s docket. Still, Biden recently said that 26 million borrowers have already applied for the relief through an online form at studentaid.gov, and student-loan companies are ready to process the 16 million applications the department has approved to date should the courts ultimately rule in favor of the policy.

“We believe strongly that the Biden-Harris Student Debt Relief Plan is lawful and necessary to give borrowers and working families breathing room as they recover from the pandemic and to ensure they succeed when repayment restarts,” Education Secretary Miguel Cardona wrote on Twitter on Friday.

“We are disappointed in the decision of the Texas court to block loan relief moving forward. Amidst efforts to block our debt relief program, we are not standing down,” he added.

What’s next for student-loan borrowers

The Education Department is appealing the Texas ruling that struck down the debt relief, which is heading to the conservative 5th Circuit. And the 8th Circuit will either decide to dismiss the GOP-led lawsuit or continue pausing the student-debt relief.

In the wake of the legal setbacks, the Education Department announced Friday that it would pause new online applications for relief.

There’s a bit of a time crunch on the courts’ decisions because student-loan payments are scheduled to resume after December 31, and many borrowers are expecting forgiveness of at least part of their debt before having to restart payments.

As Biden and the department have touted, they’re planning to roll out a new income-driven repayment plan that will make monthly payments lower by capping them at 5% of a borrower’s discretionary income, rather than the current 10%. The department also aims to roll out improvements to targeted loan forgiveness programs, like Public Service Loan Forgiveness, by next summer.

As always, implementation is key when it comes to student-debt relief. Cardona said loan companies are “ready to apply” the relief to borrowers’ accounts once they get the green light, but borrowers should ensure they keep an eye out for an email notifying them that their relief has been approved, along with emails from the department that might request additional documentation to verify income.

The department has not commented on another potential extension of the student-loan payment pause and maintains the lawsuits challenging debt relief will fail due to its confidence in the authority under the HEROES Act of 2003, which gives the Education Secretary the ability to waive or modify student-loan balances in connection with a national emergency, like COVID-19.

“The Biden Administration cannot now resume payments on January 1st,” Persis Yu, deputy executive director for advocacy group Student Borrower Protection Center, said in a statement. “It must use all of its tools to fight to ensure that borrowers receive the debt relief they need.”