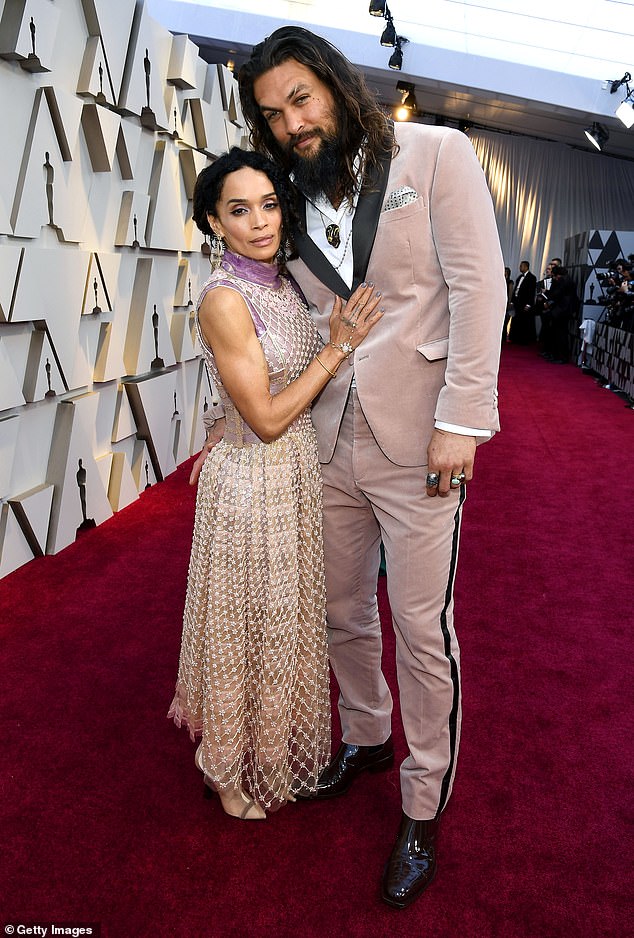 By Eve Buckland For Dailymail.Com

Jason, 43, who split from Lisa, 55, in January, commented a series of hearts on a post from Lisa’s first ex-husband Lenny Kravitz captioned: ‘Happy birthday mama….’

The post showed Lenny, 58, and the former couple’s daughter Zoe Kravitz, 33, kissing Lisa on the cheek. Lenny and Lisa were married from 1987-1993.

Jason and Lisa announced their separation jointly this January in a co-written statement he posted to his Instagram page.

‘We have all felt the squeeze and changes of these transformational times… A revolution is unfolding and our family is of no exception… feeling and growing from the seismic shifts occurring,’ they wrote.

‘The love between us carries on, evolving in ways it wishes to be known and lived. We free each other to be who we are learning to become,’ the statement added, noting: ‘Our devotion unwavering to this sacred life & our Children.’

The pair were in a relationship for 16 years and married for five. Over the course of their relationship they welcomed two children into the world – daughter Lola, 14, and son Nakoa-Wolf, 13.

Hearts: Jason showed his support for his ex wife on social media

He is now in an off-off romance with actress Eiza Gonzalez, 32,

In July Jason and Eiza confirmed  their rekindled relationship rumors while enjoying a romantic cruise on his Harley Davidson in Malibu, California.

This came less than a month after they were reported to have split after months of quietly dating.

At the time of their breakup, a source noted that a contributing factor to their brief separation was that the father-of-two and Ambulance actress are ‘just very different people.’

‘They love each other very much having dated quietly for some time before it became public,’ an insider told People after they initially called it quits. ‘They are in different life stages.’

Still, the source revealed that the former lovebirds were ‘hoping they might work it out’ and had been dating exclusively since they were introduced in February.

Multiple People insiders onfirmed the Braven actor struck up a romance with Gonzalez, though one source noted: ‘It’s nothing serious yet.’

‘They are dating. He cares about her. He’s in a great place, working on Fast X. He’s quite busy and he’s in a good place,’ a source told the outlet during the early days of their relationship.

To hear another insider tell it: ‘They’re both busy with work but are having fun together. It’s nothing serious yet.’

New romance: He is now in an off-off romance with actress Eiza Gonzalez, 32 (pictured last month)