Naomi Biden, the president’s granddaughter, is getting married at the White House. Photos show the historic mansion’s interior. 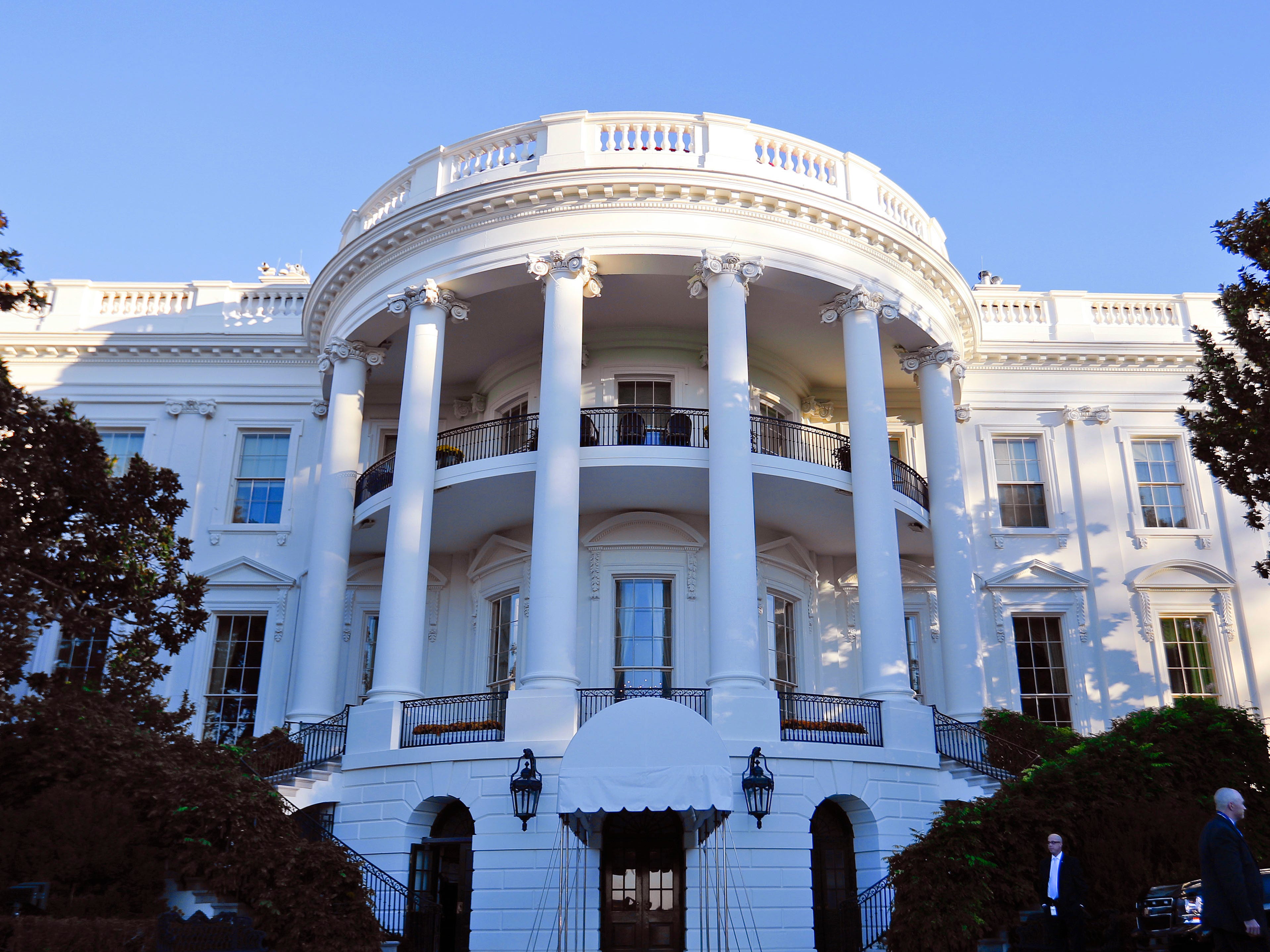 The mansion itself covers 55,000 square feet.

The White House is an iconic center of power that has hosted presidents, their guests, staff, and tourists for two centuries.President Joe Biden’s granddaughter, Naomi Biden, recently got married at the historic presidential mansion.As a modern landmark, the White House is surprisingly small. These photos illustrate the layout, floor plans, and makeup of the building.

President Joe Biden’s granddaughter, Naomi Biden, got married at the White House on November 19 to Peter Neal. Their wedding, which will take place on the South Lawn, will be the 19th wedding at the historic home.

“Peter and I are endlessly grateful to my Nana and Pop for the opportunity to celebrate our wedding at the White House,” Naomi Biden tweeted on April 4.

The presidential mansion has been a symbol of the US president’s executive authority since John Adams and first lady Abigail moved in 218 years ago. Its iconic porticos, halls, and rooms have witnessed several administrations and countless guests, including tourists, celebrities, and heads of state. Past presidents have called it “the best public housing” and a “gilded cage”.

After receiving either a high-profile invitation to an official event or clearance from a local representative for a tour, visitors to the mansion might be surprised at its modest scale, especially compared to the massive monuments and museums that sit a few blocks away.

See the decades-old architecture and decorations that make up the historic White House.

The White House is considerably larger in reputation than physical space when compared to other major landmarks across the US.A magnolia tree blossoms on the South Lawn.

An 18-acre enclosed area keeps the mansion at a distance from the public on the street in the heart of Washington, DC.

From the street, it looks far away, but looms large.1600 Pennsylvania Avenue

The mansion’s iconic features are obvious symbols that the mansion has been a center of power for more than 200 years, but they might be less grand than visitors expect.The White House is reflected in a puddle on March 22, 2019, amid news that special counsel Robert Mueller has concluded his investigation into Russian election interference and possible coordination with associates of President Donald Trump.

The mansion itself covers 55,000 square feet, or around 30% of the area enclosed by the fence, and is 168 feet long from east to west — about three-quarters of the wingspan of a 747 aircraft.

Inside and out, the White House serves as an important platform for the president to meet with the press, public, and international rulers. An estimated 90 people work on building staff to keep it in tip-top shape, and a few hundred administration staffers work in the offices of the West Wing.U.S. President Joe Biden speaks as first lady Jill Biden listens during a Cinco de Mayo reception at the Rose Garden of the White House May 5, 2022 in Washington, DC.

Though the grounds are maintained with extensive regular landscaping and painting, only a few renovations have added space to the mansion.Workers paint the North Portico of the White House, Thursday, Aug. 16, 2018, in Washington.

The British burned down the original building during the War of 1812, so the White House as we know it today was constructed after that.”The President’s House” as it appeared after the fire, by George Munger, 1814-1815.

The West and East wings were added in 1902 and 1942, respectively, and a four-year renovation completed in 1952 installed a steel frame to fortify the building.The White House, circa 1846.

The building has three wings connected by two colonnades. The West Wing, where the Oval Office and the president’s staff work, has three floors. The East Wing, where the first lady and her staff work, has two floors. The residence, located in the middle, has two floors of basements, a ground floor where building staff work, the state floor where official events take place, then two floors where the first family lives.White House staff members wave to President Joe Biden from a balcony on the south side of the White House as he departs on June 25, 2021, in Washington, DC.

In the residence, the mansion’s state floor contains several rooms that serve as the main reception areas for the first couple to meet with official visitors and hold events.

Its style has changed with each incoming president, but it was First Lady Jacqueline Kennedy who famously filled the mansion with historic American art and furniture, transforming the mansion’s interior into a gorgeous and meaningful spectacle.First lady Jacqueline Kennedy shows CBS reporter Charles Collingwood through the White House during a nationally televised tour in this February 1962 file photo.

The classic touches added by the former first lady are still in the White House’s main rooms today in the paintings and colored silk that cover the walls in reception areas like the Green Room.The Green Room is decorated at the White House during a preview of the 2016 holiday decor, Tuesday, Nov. 29, 2016, in Washington.

The rooms provide a picturesque and intimate setting for the president and first lady to receive their diplomatic guests.President Trump and the First Lady at a state dinner with the President of France and Mrs. Macron.

The main drawing rooms are among the most visible areas of the mansion. They connect to the main hallway, Cross Hall.President Barack Obama walks down the Cross Hall to hold his first news conference, Monday, Feb. 9, 2009, in the East Room of the White House in Washington.

The hall connects all the main parlors, including the Blue and Red rooms, providing a prime space for festive seasonal decorations.The Lower Cross Hall is decorated with “snowball” arches created from more than 6,000 ornaments and snowmen lining the corridor in the White House during a preview of the 2016 holiday decor, Tuesday, Nov. 29, 2016, in Washington.

The main corridor only measures a little less than 18 feet by 80 feet, about 20 feet longer than a bowling lane.The Lower Cross Hall is decorated with “snowball” arches created from more than 6,000 ornaments and snowmen lining the corridor in the White House during a preview of the 2016 holiday decor, Tuesday, Nov. 29, 2016, in Washington.

The State Dining Room is home to many of the official functions, and was expanded to approximately 49 feet by 36 feet, which can accommodate 140 guests. It’s where the most formal meals are held, including state dinners.

The first family’s residence is a floor away from the mansion’s main reception rooms, accessed by a private staircase.A Secret Service agent stands guard on the staircase leading to the White House residence.

The first family’s residence on the second and third floors are some of the most private and historically significant rooms in the mansion.The second floor of the residence contains the president’s bedroom.

The Yellow Oval Room is one of the largest rooms of the residence floor and has provided an intimate space for the first couple to host guests who have the honor of seeing the private level.President Ronald Reagan and wife Nancy entertain King Carl XVI Gustav of Sweden and his wife Queen Silvia November, 22, 1981 in the Yellow Oval Room.

There are a couple smaller sitting rooms that may feel more intimate for the first family, including the Treaty Room, seen here for a World Cup soccer game in 2011.President Barack Obama, First Lady Michelle Obama, and their daughters Sasha and Malia watch the World Cup soccer game between the U.S. and Japan, from the Treaty Room office in the residence of the White House, Sunday, July 17, 2011.

The Lincoln Bedroom, named for the former president who used the room as an office and is rumored to still haunt the space, serves as a guest room.Shown here is the Lincoln Bedroom at the White House which is decorated in yellow.

The iconic room’s last major refurbishment was by former first lady Laura Bush in 2007, but all first families are invited to put their personal touches on the residence’s decorations.First Lady Laura Bush stands in the newly refurbished Lincoln bedroom of the White House on Feb. 08, 2007.

The West Wing is where private rooms are officially designated and designed for the administration’s work.

Parts of the well-known West Wing resemble a standard office building, complete with photos of the present’s inauguration celebrations.Photos of President Donald Trump’s inauguration are hung on the walls of corridors in the West Wing of the White House in Washington, Monday, Jan. 23, 2017.

The Cabinet Room allows for 22 people, including administration officials and relevant outside agents, to take a seat at the large conference table for meetings on specific issue areas.The recently refurbished Cabinet Room is seen during a media tour September 8, 2004 at the West Wing of the White House in Washington, DC. The Cabinet Room was refurbished this summer for the first time in 22 years with refurbishment includes a new rug, draperies, paint color and lighting.

The West Wing’s “Situation Room” is a major center for the administration’s work, as it’s actually a series of conference rooms that spans 5,000 square feet to host meetings with the president and top defense officials.The main conference area of the White House Situation Room has been newly remodeled and was shown to the press May 18, 2007 in Washington, DC. The 5000-square foot Situation Room is actually a series of five conference rooms that are now equipped with flat-screen televisions for secure video conferences, including a new Watch Floor where officers can keep up with a steady stream of classified and unclassified information.

Though it’s smaller than people might expect, it’s still the 34th largest house in the US, and it’s filled with more history than any of them.The White House is seen under dark clouds in Washington, Friday, Feb. 27, 2009.