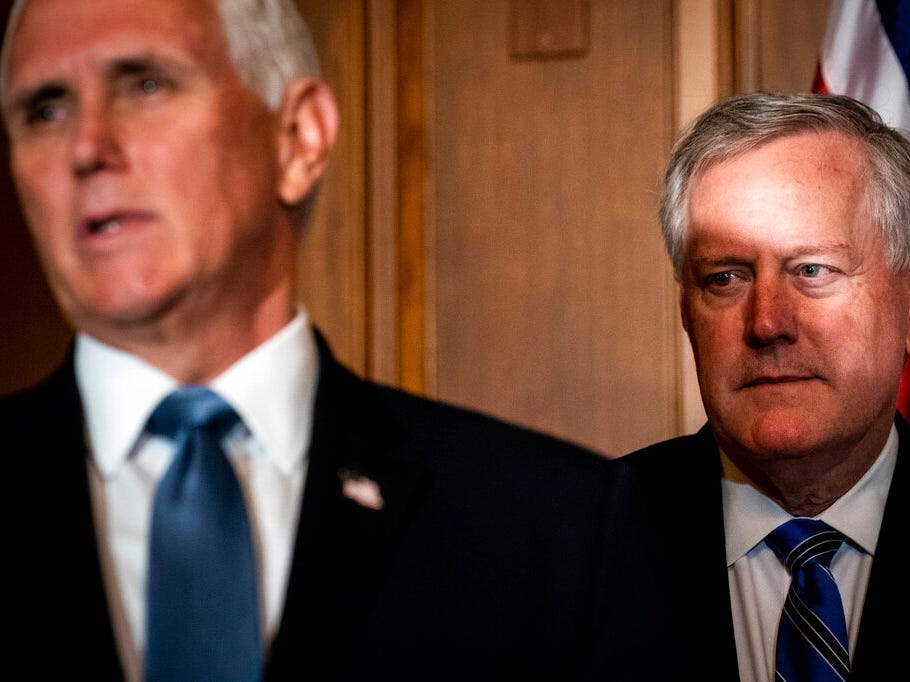 Mike Pence on NBC News said he was “disappointed” in ex-White House chief of staff Mark Meadows’ tenure.
He said “it was clear” that Meadows swayed Trump against the White House coronavirus briefings.
The former vice president felt that the briefings served the public well earlier in the pandemic.

Former Vice President Mike Pence on Sunday said he was “disappointed” in the tenure of former White House chief of staff Mark Meadows, arguing that the ex-Trump aide “did not serve the president well.”

During an interview on NBC’s “Meet the Press,” Pence made it clear that he was less than thrilled with Meadows’ performance when the former North Carolina congressman served in the White House from March 2020 to January 2021.

“The president’s got to rely on his senior team. What General John Kelly did when he became White House chief of staff, and what frankly all the best White House chiefs of staff have done throughout history, is make sure that the only people that get into the Oval Office are people that have the credibility to be there. And they make sure that the president understands what they’re coming to talk about, so he’s in a position to be able to make the decisions that only a president can make,” Pence said.

“General Kelly created that order, and sadly, when he left Mick Mulvaney I think did his level best as an interim chief of staff to bring that about,” he continued to say. “But I was disappointed in Mark Meadows’ performance as chief of staff, particularly at the end. From very early on, when it was clear that he had talked the president out of White House coronavirus press briefings, in a very real sense I think his tenure as chief of staff did not serve the president well.”

Meadows served as White House chief of staff from March 2020, during the onset of the coronavirus pandemic, until January 2021.

Meadows has become a key figure in the House January 6 committee’s probe. He was involved in Trump’s unsuccessful efforts to overturn the 2020 election while serving in the role, according to the House committee. Meadows was subsequently held in criminal contempt of Congress for refusing to cooperate with the panel.

Former White House aide Cassidy Hutchinson later testified before the panel this past summer that she wanted the then-chief of staff to “snap out” of it and pay closer attention to the unfolding riot at the Capitol that day.

Pence told host Chuck Todd he felt that the daily coronavirus briefings in 2020 were beneficial to the public, but once Meadows joined the administration, there was a shift in the president’s feelings toward the briefings.

“I’ve always believed that in a public health emergency, more is more when it comes to information. We very quickly began press briefings on a daily basis. And I think they served the country well,” he said.

“But once we went through that early difficult period with Covid and the new chief of staff started his tenure, the pressure began a month or so into the pandemic to move away from the briefings.”