Australian woman speaks out after a man — who she alleges broke into her home, raped her, and sent an apology text for doing ‘the most heinous thing possible’ — was found not guilty 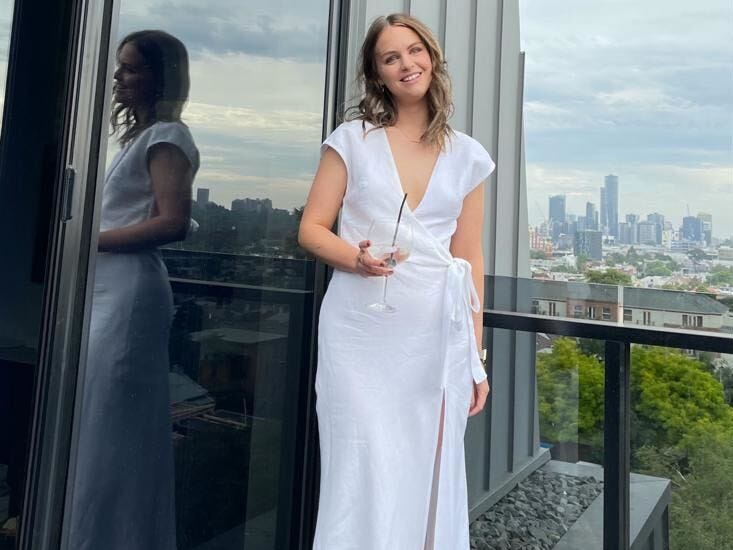 Lyndon Montgomery was found not guilty of breaking into Holly Harris’ home and raping her.
Harris spoke with Insider about why she’s deciding to speak publicly about the case.
“I just refuse to accept that this is the reality for women,” Harris said.

When Holly Harris woke up, she was freezing. The sliding door in her bedroom was ajar, which puzzled her. She never slept with the door open, especially on a cold, September night in Melbourne, Australia.

As she sat up, she realized she was naked, her hair was matted, and she was in pain. She looked to her left and saw a man lying there. His name way Lyndon Montgomery.

Nearly four years later, on September 7, Montgomery was found not guilty of breaking into Harris’ home and raping her.

In her first interview since the tense trial, Harris spoke with Insider about how the case impacted her and why she’s decided to identify herself.

Harris’ name is not in any of the previous stories about her case because she did not consent to have it published. Under Victorian law, which governs the Australian state in which she lives, it is an offense to publish any information that could lead to the identification of a person against whom a sexual offense is alleged to have been committed but an adult complainant can consent to make their own identity public.

After the verdict, Harris changed her mind about remaining unidentified because she wanted other women who may have gone through something similar to not feel ashamed.

“I just refuse to accept that this is the reality for women and it’s devastating for other women who have been raped or allegedly raped,” she told Insider.

‘I’ve done the most heinous thing’

On September 23, 2018, Harris went out with friends to a local bar on Chapel Street in Melbourne. Prior to arriving at the bar, she said had quite a few drinks at a friend’s boyfriend’s place and continued to drink with friends at the bar until she became intoxicated. Her memory after this, she told Insider, isn’t as clear.

Upon leaving the bar, friends recounted that she got into an Uber with her best friend, her best friend’s boyfriend, and Montgomery — an acquaintance. When Harris arrived outside of her home, she said she remembered getting out of the car, walking to her door, and then noticing Montgomery following her.

She said she asked him what he was doing and he told her he was walking her to her door. According to Harris, after they exchanged a few words — which included him professing his love to her — she said she wasn’t interested, said goodbye, and then locked the door behind her.

Harris said her nightly routine always consists of taking a shower before bed, and that’s what she said she did on this particular night. At one point, she said she turned around and noticed Montgomery standing in the bathroom. That’s when she told him to get out, she said. Harris told Insider her memory is limited after this point but that she remembered Montgomery on top of her in her bed. Later, in court, Montgomery did not dispute that they had sex but testified that it was consensual.

After waking up the next morning disheveled with Montgomery lying next to her, Harris said she asked him to leave, which he did. That morning, she told her friends what happened.

At their urging, Harris went to the hospital later that night but was told she could not be seen. She said the emergency doctor’s reasoning was that she was a “crime scene,” meaning the medical professionals didn’t want to interfere with a potential criminal investigation. At the time she wasn’t in the mindset of pressing charges, Harris said, adding she just wanted help because she was in pain.

Four days later she received a text message from Montgomery.

In the text, which was obtained by Insider, he said: “I’ve done the most heinous thing possible you can do to a woman, and I’ve done it to you. It was never my intention for things not to be consensual, I should have realized what you were communicating to me, but I didn’t.”

At the time, Harris was 19 years old. Initially, she wasn’t sure if she wanted to press charges. That changed a few weeks later when Montgomery began telling people his version of what happened that night, she said.

Harris went to the Victoria Police and after some convincing, law enforcement had her initiate a pretext phone call — a recorded call used in sexual assault investigations. The phone calls have drawn criticism from advocates who say the practice can be traumatic for sexual assault survivors, according to The Australian Broadcasting Corporation.

In the phone call between Harris and Montgomery, he admitted to entering Harris’ home through her sliding door but claimed the sex was consensual, according to The Herald Sun, a newspaper based in Melbourne.

During the trial, Montgomery gave the court his account of what happened that night, saying he believed things were “flirty” between him and Harris at the bar. He testified that when the Uber they took together arrived at Harris’ house, he walked her to her door, and she told him that she “wanted [it] to happen” but was unsure because she was in a relationship. According to Montgomery, they entered the house together, but Harris soon asked him to leave, which he did. “I honestly felt like we had this good and emotional connection together and I wanted to go and talk to her about that,” he said.

He said he noticed a sliding door to Harris’ bedroom and checked to see if it was unlocked: “It was so I went in.”

Montgomery claimed that he knocked on Harris’ bathroom door, where he heard Harris showering, and “she said yes, you can come in.” He said they then showered together before moving back to the bedroom where they had consensual sex, according to The Herald Sun.

Montgomery said sending the text message was a mistake and that he sent it to appease Harris in an effort to prevent her from going to the police, as per the outlet.

The Herald Sun reported his lawyer, Belinda Frajic, argued that Harris’ recollection of the night was “patchy” due to her level of intoxication. Franjic also asked the jury not to jump to conclusions over the text message.

“It’s easy to read a text like that and go ‘open, shut, guilty,'” Franjic said in court, according to the newspaper.

The Herald Sun also reported that Franjic asked the jury to ignore the “current climate” around consent and women’s safety.

Franjic did not respond to Insider’s request for comment.

Throughout the three-week trial, Harris was on-edge and anxious. She said her Apple Watch alerted her that her resting heart rate had gone from 60 beats per minute to 83 beats per minute.

Harris wasn’t in the courtroom during the trial and gave her testimony virtually on the advice of her legal team, but looking back, she said she regrets doing that. She told Insider she wished she had faced the 12-person jury.

“Having somebody sit in front of you and tell them the worst thing that’s ever happened to them is often more impactful in person,” she said.

When the not-guilty verdict was announced, the 23-year-old said she was devastated but not surprised. “It was sort of just a crushing reality,” she told Insider. “I think this outcome has said that it doesn’t matter how much evidence you have. It will never be enough when you’ve got a rich, white, private-school boy standing up there with the best lawyer that money can buy,” she said.

Harris said she believes her case is an example of how women are expected to be the perfect victim when making sexual assault allegations. Despite all of the evidence presented in court — her hospital visit, the pretext phone call, and Montgomery’s text message — it still wasn’t enough to convince the jury. Harris worries that her case may discourage others with less evidence from coming forward.

“There’s no accountability in that and men will continue to think that they can get away with it and that’s so not okay,” she said. “That’s what I want to change somehow. I have no idea how, but even if it’s just speaking out about it.”

Harris is currently in university studying law. After her experience with the Australian legal system, she said her desire to become a criminal lawyer has been tainted.

“I imagine it would be very difficult to take on such a broken system and work in it every day. I think it’d be quite exhausting even if you were trying to do the right thing,” she said.

The case’s outcome has garnered outrage from a number of Australians, including Clementine Ford, a writer who posted a video to her Instagram about the verdict. “You are so strong to have withstood the legal system and every single way it disempowers survivors. I think you’re incredible. I’m so sorry you were let down. I believe you,” Ford said.

If you are a survivor of sexual assault, you can call the National Sexual Assault Hotline (1-800-656-4673) or visit its website to receive confidential support.