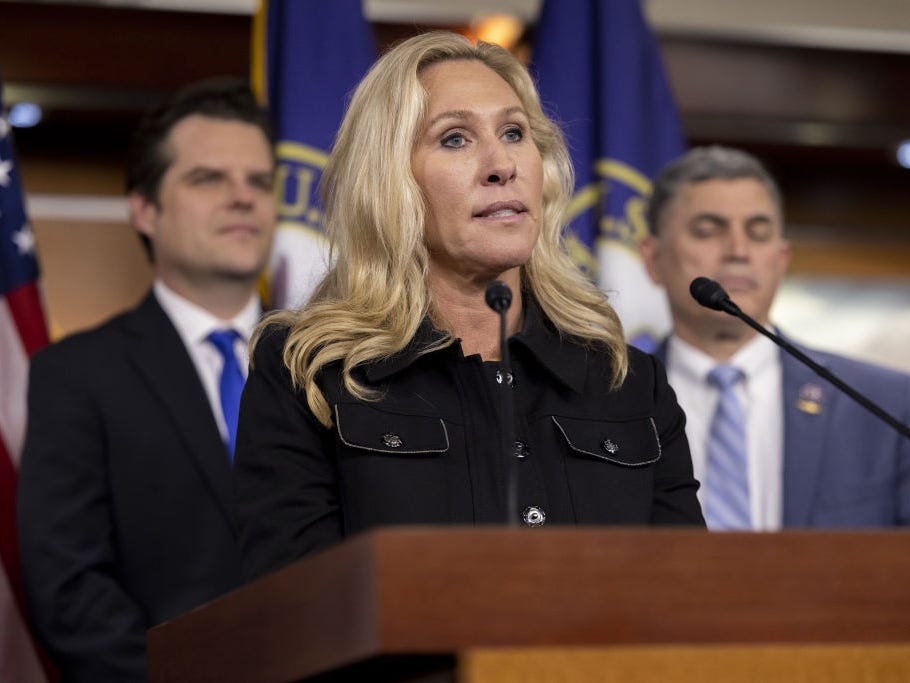 Marjorie Taylor Greene (R-GA) at a press conference on US funding for Ukraine at the US Capitol on November 17th, 2022.

Far-right Republicans want Ukraine aid restricted, with some saying it should be cut off entirely.
With the GOP claiming a narrow House majority, some could seek to make those plans a reality.
But one analyst told Insider that broader bipartisan support for Ukraine aid remains solid.

After a missile hit Poland last week, confusion swirled, with initial reports that Russia was responsible later rejected by Western officials, who said it was likely an accident by Ukrainian air defenses.

Far-right Republican Rep. Marjorie Taylor Greene seized on the chaos, suggesting that Ukrainian leadership was trying to embroil the US in a larger conflict.

“We must stop letting [Ukrainian President Volodymyr] Zelensky demand money & weapons from US taxpayers while he is trying to drag us into WW3. No more money to Ukraine. It’s time to end this war and demand peace,” she tweeted.

Days later, when it was announced that the Republican Party had won a narrow majority in the House of Representatives, Greene and several Republican allies laid out a concrete plan to more tightly audit the aid US gives to Ukraine.

The measure does not amount to the full withdrawal of aid to Ukraine that Greene has called for in rallies and in other statements, but if the plan comes to fruition it would signal a much more skeptical approach to Ukraine’s cause.

The campaign to cut off, or restrict, American support for Ukraine in its battle against Russia’s invasion has been gathering momentum for months.

Rallying around “America First” nationalism, some Republicans have said that the US should not be getting involved in another costly foreign conflict, following the wars in Iraq and Afghanistan. They have also questioned Zelenskyy’s motives and pushed conspiracy theories about the conflict, while wanting the US government’s focus to be on curbing immigration instead.

Russia, meanwhile, seems eager to buttress support among the Republican far-right, pushing disinformation about the conflict tailored to appeal to US conspiracists.

Ukraine remains heavily dependent on US aid, to the tune of $60 billion in aid and military assistance since Russia’s invasion in February, and the statements by Greene and others have provoked alarm in Kyiv.

President Zelenskyy, on the eve of the midterms, urged US lawmakers not to weaken in their support for his country.

“There have been these mixed messages that were in the US mass media, particularly from the Republican side … that we need to be more careful about supporting Ukraine – and maybe that at a certain point, the support could be reduced. For us this is a very concerning signal,” Zelenskyy told CNN at the time.

Greene’s message appears to resonate with the Republican grassroots, half of whom said they favored cutting aid to Ukraine in a poll conducted by the Wall Street Journal late last month.

The stance also appears to have found support among powerful figures in the party, like Rep. Kevin McCarthy, who’s seeking election as House Speaker. In October, McCarthy said that Kyiv could not “expect a blank check” if Republicans win back the House in the midterms.

Gunner Ramer, political director of the centrist Republican Accountability Project, told Insider that a narrow Republican majority in the House meant that lawmakers such as Greene would wield outsized influence.

“I have seen no evidence to suggest that Kevin McCarthy would do anything other than give in to Greene and far-right Republican demands,” he said.

But others believe that that it’s unlikely aid to Ukraine will be significantly changed by the new balance of power in Congress. Whit Ayres, a veteran DC political consultant, told Insider that support for Ukraine retains wide bipartisan backing in Congress, as well as the support of most Americans.

“They may be successful in putting certain conditions on further aid, regarding transparency and amount. But they’re very unlikely to be successful in eliminating that aid,” Ayres remarked of Greene and her allies.

“There is too much support throughout America in both parties to continue to help Ukraine fight off a brutal invasion by a dictatorial Russian leader,” he added.

Hayes Brown, an MSNBC columnist, believes that McCarthy may have signalled a willingness to restrict Ukraine aid as part of a ploy to negotiate compromises and budget cuts in other spending areas with Democrats.

Ayres, meanwhile, cautioned House Republicans hostile to Ukraine aid that pressing the issue could alienate moderate voters, for whom core policy issues like crime and the economy remain key.