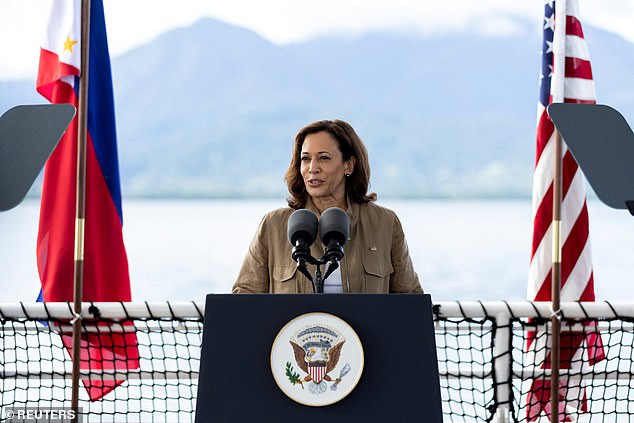 Kamala pokes the dragon: VP Harris slams Beijing’s ‘coercion and intimidation’ in the South China Sea and says U.S. will stand up for ‘freedom’ in vow to defend the Philippines during speech on the edge of contested waters

Vice President Kamala Harris made a two-day trip to the Philippines to help repair the U.S. relationship with the country
Comes as China tries to extend its reach and influence over the South China Sea
In a speech on Tuesday, Harris denounced Beijing’s ‘coercion and intimidation’
She also recommitted the U.S. to defending the Philippines following a souring of relations under its previous President Rodrigo Duterte

Kamala Harris went on the offensive against China in a speech from the neighboring Philippines islands on Tuesday, accusing the communist nation of ‘intimidation and coercion’ in the disputed South China Sea.

The administration has been upping its rhetoric in recent months regarding its commitment to defending democracy – touting the message both at home and abroad.

Harris said in her speech during a swing through Asia this week that the U.S. would continue to stand up for ‘freedom’ and vowed the Biden administration would back the Philippines

The vice president carried the White House message overseas as it looks to counter Beijing’s influence in Asia and one of the world’s busiest shipping passes.

China claims that the contested waters of the South China Sea are its own and has increased its aggression and presence in the region in recent years – including building and fortifying artificial island and deploying fleets from small nations like the Philippines.

Vice President Kamala Harris made a two-day trip to the Philippines to help repair the U.S. relationship with the country as China tries to extend its reach and influence over the South China Sea

In a speech from Puerto Princesa, Philippines on Tuesday, Harris denounced Beijing’s ‘coercion and intimidation’ in the region

‘Communities like this have seen the consequences when foreign vessels enter Philippine waters and illegally deplete the fishing stock, when they harass and intimidate local fishers, when they pollute the ocean and destroy the marine ecosystem,’ Harris said, without mentioning China by name.

The Philippines has for years accused China of harassing fishing vessels and naval ships for the nation.

Harris met with Philippines President Ferdinand Marcos Jr. in Manila on Monday. She reiterated the ‘unwavering commitment’ the U.S. has to defending the Philippines if its ships or planes are attacked by the South China Sea.

Many saw the vice president’s two-day trip to the Philippines as a sign of the country’s significance to Biden’s foreign policy to counter China’s growing influence, especially with the exit of former Philippine leader Rodrigo Duterte earlier this year.

Harris, speaking on board the Philippine Coast Guard BRP Teresa Magbanua, recommitted the U.S. to defending the Philippines following a souring of relations under its previous President Rodrigo Duterte

The U.S.-Philippine relationship soured under Duterte’s rule as he frequently expressed anti-American sentiment and was friendly toward China.

Marcos, who succeeded Duterte earlier this year, signaled he is open to repairing the relationship with the U.S.

An incident occurred two days before Harris’ speech that highlighted the frequent altercations in the region where Chinese and Philippine ships encountered each other over debris Philippine officials believe was from a Chinese rocket.