Trump rips the Supreme Court as ‘nothing more than a political body’ after they ruled against him, even though he appointed 3 justices of the conservative majority 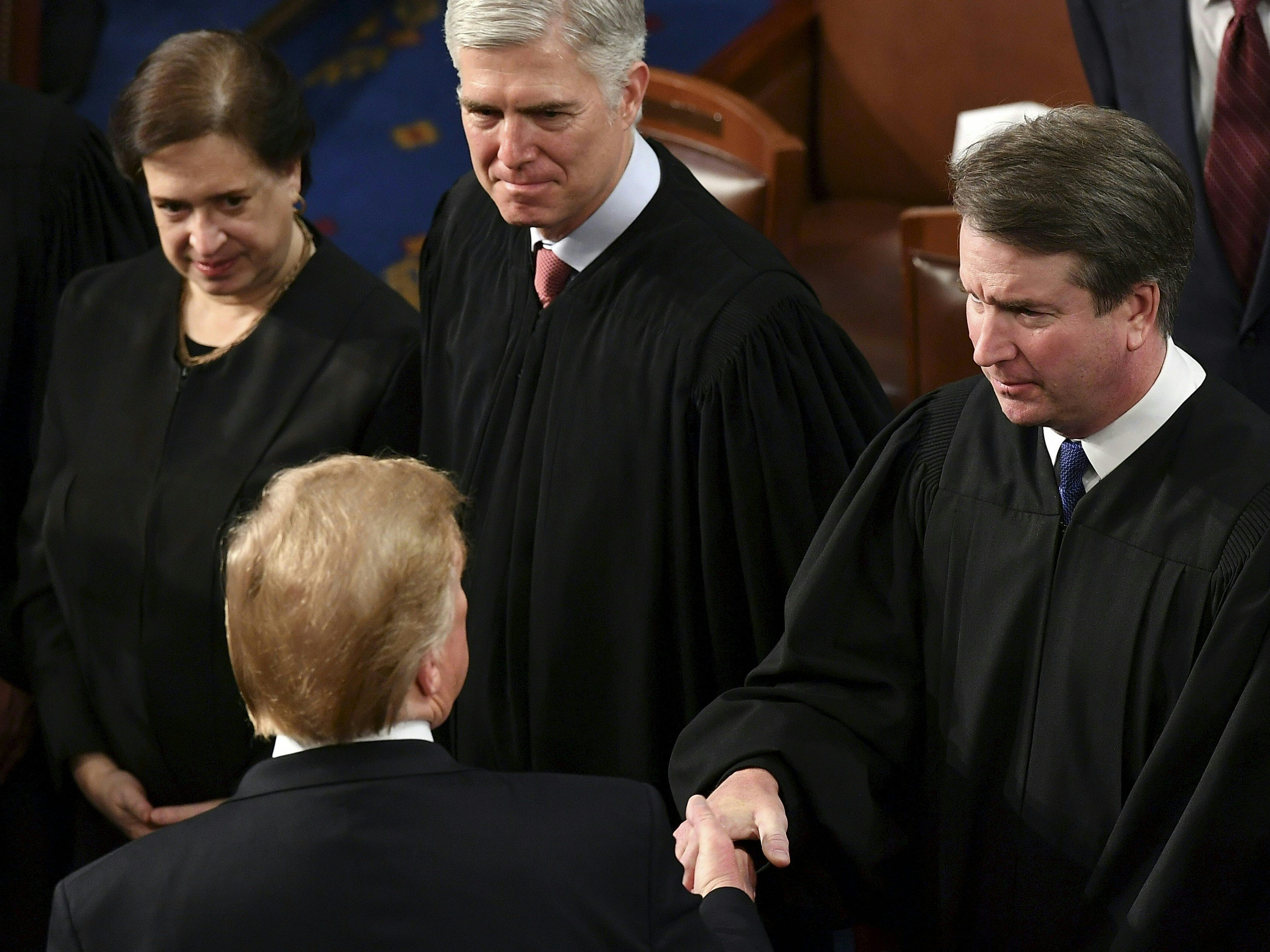 US President Donald Trump greets US Supreme Court Justice Brett Kavanaugh (R) following his State of the Union address at the US Capitol in Washington, DC, on February 5, 2019.

The Supreme Court on Tuesday cleared the way for Trump’s taxes to be released to Congress.
Trump on Wednesday lashed out at the court in a series of posts on Truth Social.
Trump’s appointments cemented the court’s 6-3 majority and led to the reversal of Roe v. Wade.

Former President Donald Trump criticized the Supreme Court in a series of Truth Social posts after the high court on Tuesday rejected his request to block Congress from obtaining his tax records.

“Why would anybody be surprised that the Supreme Court has ruled against me, they always do! It is unprecedented to be handing over Tax Returns, & it creates a terrible precedent for future Presidents,” Trump said in a post early Wednesday morning. “The Supreme Court has lost its honor, prestige, and standing, & has become nothing more than a political body, with our Country paying the price.”

In follow-up posts, Trump rehashed complaints over the court’s handling of the 2020 election and referenced reports of leaked opinions. In addition to the leak of the decision that overturned Roe v. Wade, a former anti-abortion leader recently alleged that the 2014 Hobby Lobby decision involving contraception was also leaked.

He also accused the court of being “petrified” of Democrats and trying to be “politically correct” instead of “doing what is BEST for the USA.”

On Tuesday, the Supreme Court dismissed Trump’s bid to block his tax returns from being released to Congress. The move opened the door for House Democrats, who have been seeking the returns since 2019, to access the documents just as the party is set to lose its House majority in January.

Breaking tradition, Trump declined to release his tax returns publicly when running for president in 2016. The House Ways and Means Committee asked the IRS to release his returns to them in April 2019 as it investigated the agency’s auditing process.

Trump appealed to the Supreme Court to block the IRS from releasing his tax records to the House. The court gave no explanation for turning down the request and did not note any dissents.

Recent polling suggests trust in the Supreme Court has reached record lows. However, the court is often held up by many on the right as one of Trump’s greatest accomplishments. In his one term as president, Trump appointed three justices — Neil Gorsuch, Brett Kavanaugh, and Amy Coney Barrett — cementing the court’s 6-3 conservative majority likely for years to come.

The new makeup of the court has resulted in significant decisions that were celebrated by Republicans and decried by Democrats. Most notably, the court overturned nearly 50 years of precedent by axing federal abortion rights, delivering on one of Trump’s central promises.

Representatives for the Supreme Court did not immediately respond to Insider’s request for comment.

Chief Justice John Roberts and other members of the high court have continued to defend its legitimacy despite the rising criticisms.