Russia partners like China and India expressing concerns over Ukraine may have forced Putin’s hand and driven him to try and end the war quickly, Russia scholar says 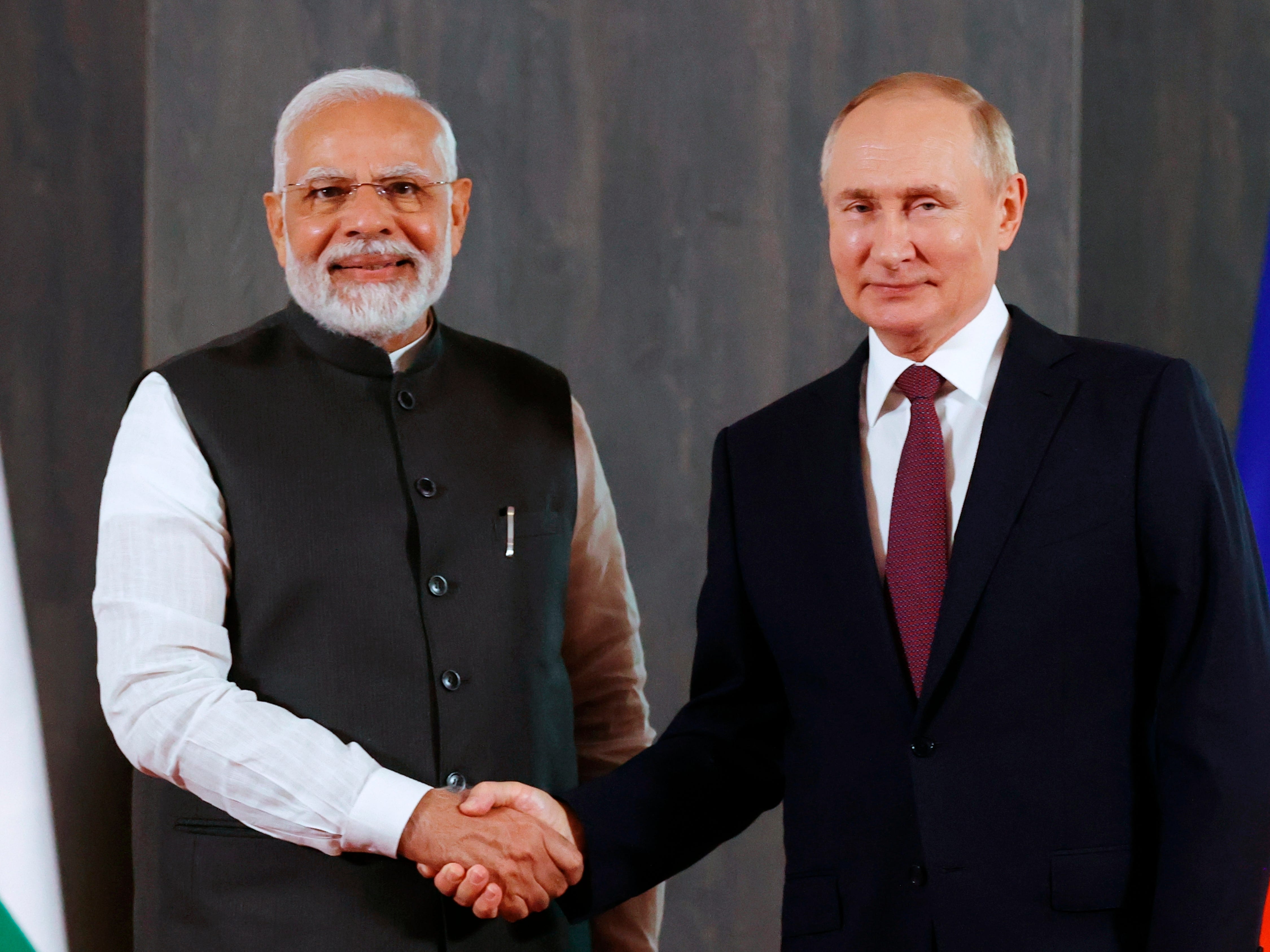 Russian President Vladimir Putin, right, and Indian Prime Minister Narendra Modi pose for a photo shaking hands prior to their talks on the sidelines of the Shanghai Cooperation Organisation (SCO) summit in Samarkand, Uzbekistan, Friday, Sept. 16, 2022.

Some of Putin’s global partners expressed concerns about his war in Ukraine last week.
Days later, Putin escalated the war by announcing military mobilization and threatening nuclear warfare.
A Russia expert told Insider Putin may have acted out of fear of straining relationships with nations like China and India.

Russian President Vladimir Putin escalated his unprovoked war on Ukraine this week, just days after some of his supposed partners publicly expressed doubt over it — and the events may well be related.

Since invading Ukraine in February, Russia has been shunned by much of the world and faced crippling sanctions from the West. But as Russia grew more isolated, some nations have either stood by Putin or avoided directly condemning him.

Both China and India have been powerful partners of Russia throughout the war, declining to institute sanctions and continuing to purchase the country’s energy products. However, leaders of both countries recently took the rare step of speaking against the war.

During a meeting with Chinese President Xi Jinping in Uzbekistan on September 15, Putin acknowledged Xi had “questions and concerns” regarding the war. The following day, Indian Prime Minister Narendra Modi criticized the war during a face-to-face meeting with Putin.

“I know that today’s era is not an era of war, and I have spoken to you on the phone about this,” Modi told Putin, Reuters reported.

Less than a week later, on Wednesday, Putin said he was calling up 300,000 reservists to join the fight, something he had avoided doing for fear of backlash among the Russian people. The announcement, in which he also threatened to use nuclear weapons, came after the Ukrainian military made major gains in recent weeks.

Experts told Insider it would be weeks or months before the mobilized troops are trained, equipped, and deployed. They also said Putin’s decision to take this step now showed how poorly the war was going for Russia and how desperate the Russian leader was to turn the tide.

“That Putin would do this shows how badly he feels the need right now to change the momentum, which has been all in Ukraine’s favor,” Daniel Treisman, a professor at the University of California, Los Angeles, whose work focuses on Russian politics and economics, told Insider.

In addition to fearing another potential counteroffensive by Ukraine, Putin was likely also driven by Xi’s and Modi’s concerns — and his fear of losing key partners — according to Robert English, a professor at the University of Southern California who studies Russia, the Soviet Union, and Eastern Europe.

“The evidence of criticism of allies like China or neutral states like India clearly put more pressure on him,” English told Insider. He added that leaders of those nations seem to have told Putin they did not approve of the situation in Ukraine because it was harming their reputations on the world stage and costing them economically and politically.

English said what he suspects Putin heard was: “‘Find some way to settle this quick, to wind this war down, because we will not remain at your side for another six months of this brutality.'”

“He heard a message like that, so he’s trying to up the ante,” English said. “He’s trying to change the military balance the best way he can.”

If Putin has mobilized troops in an effort to end the war as quickly as possible, as he assured Modi he would seek to do, it’s not at all clear if it will be successful.

“It’s an unsatisfactory and inadequate response to the motivation, manpower, and materiel on the Ukrainian side,” English said, explaining that military aide and intelligence from the West has given Ukraine an advantage on the battlefield. “It’s not going to do the job.”

Etihad flights: Huge glitch return flights from Australia to Europe in summer for less than $300

Social Determinants of Health: Technology, examples and healthcare trends in 2021

Etihad flights: Huge glitch return flights from Australia to Europe in summer for less than $300

Social Determinants of Health: Technology, examples and healthcare trends in 2021