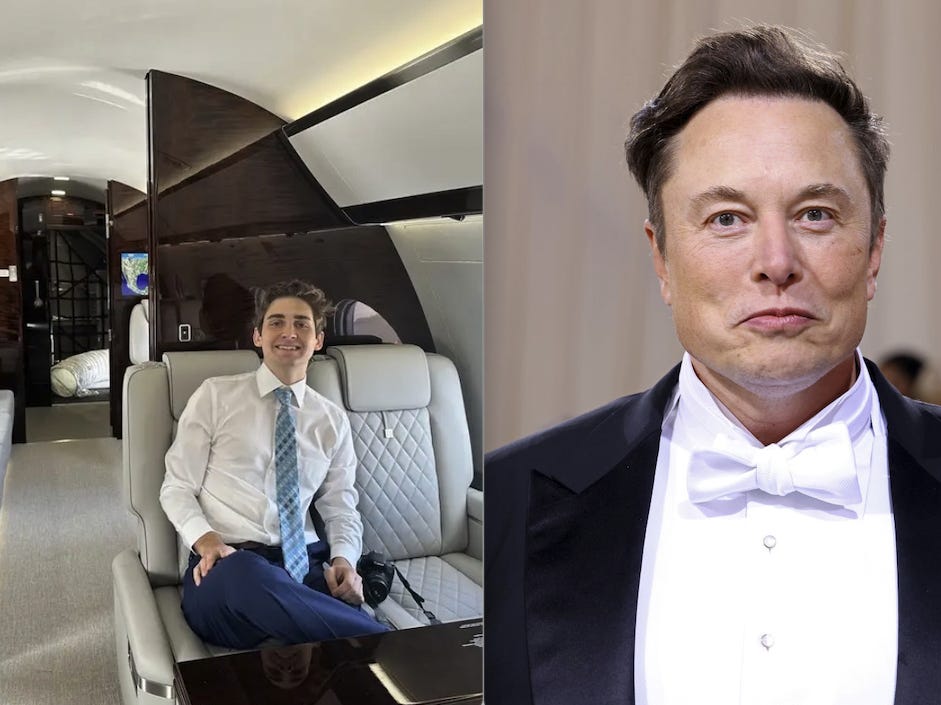 Jack Sweeney has used the ADS-B Exchange site to track the private jets of Elon Musk and other celebrities.

Jet-tracking student Jack Sweeney is calling for people to boycott ADS-B Exchange.
JetNet announced it had purchased the public flight-tracking site on Wednesday.
Sweeney uses the site to share flight data on celebrities, including Elon Musk and Donald Trump.

The college student who tracks Elon Musk’s jet says he’s worried the tracking software he uses to keep tabs on celebrity aircraft could soon be yanked from the public after it was sold Wednesday.

Aviation data company JetNet said on Wednesday that it bought ADS-B Exchange, a free website that tracked thousands of commercial aircraft around the world.

Now it’s unclear whether the flight information on the ADS-B exchange will remain free to the public. Jack Sweeney, the 20-year-old student behind the @ElonJetNextDay account and other Twitter accounts that track celebrity jets, said selling the company violates the spirit of the air enthusiast community that’s powered the site. He’s even calling for a boycott.

Dan Streufert, president and founder of ADS-B Exchange, said in a statement that the deal would “meet the business needs of our users while maintaining our enthusiast roots and unfiltered data.” He didn’t respond to a request for comment from Insider.

The plane-tracking company, which was founded in 2016, uses more than 9,000 volunteer-run radios, or “feeders,” to transmit data from ADS-B-equipped aircrafts. ADS-B is a surveillance technology that broadcasts information like GPS location and altitude from one aircraft to another, and to ground stations.

The software was sold for an undisclosed amount. The website has been popularized by Sweeney, who attends the University of Central Florida. Sweeney uses ADS-B to follow certain aircraft, like those owned by Musk, Donald Trump, and Taylor Swift. He then sets up bots to automatically upload their flights to Twitter.

Sweeney took a jab at JetNet and Streufert for the sale, saying the move undermines the point of creating ADS-B Exchange in the first place. “The whole basis of the organization was that it’s a community,” he told Insider. “Everyone is choosing to give their data to make a community server, not to a private equity firm or company that is trying to make money.”

A spokesperson for JetNet did not respond to a request for comment ahead of publication.

Meanwhile, Sweeney is calling for feeders to boycott the platform, calling it a “sad day.” He said he’s looking for alternatives to ADS-B Exchange, like creating his own version or using another tracking websites, like Open Sky Network and airframe.io.

This is not the first challenge Sweeney has faced since he opened his jet-tracking Twitter accounts. In early 2022, Musk offered him $5,000 to stop sharing the information, but the then-teen upped the ante and asked for $50,000. Musk never followed up, Sweeney said.

Later, his accounts, including @ElonJet and @ZuccJet, were suspended in December after the billionaire took over Twitter, with Musk citing the jet-tracking accounts as a “physical safety violation.”

Twitter has even updated its private information policy to restrict users from sharing people’s live locations and Sweeney has begun posting flight data with a 24-hour waiting period to adhere to the social media site’s policies.

According to the FAA, sharing the public information is legal, but there are a few federal programs that can help block the tracker, however the agency acknowledges that these are not a “silver bullet” and can be skirted via ADS-B Exchange.

Double tragedy as a man and a woman drown at Frazer Beach, Frazer Park on NSW’s Central Coast

Double tragedy as a man and a woman drown at Frazer Beach, Frazer Park on NSW’s Central Coast