An American traveler’s bag was lost on her vacation to Europe. 5 weeks later a stranger sent a photo of her luggage in a city she had never even been to. 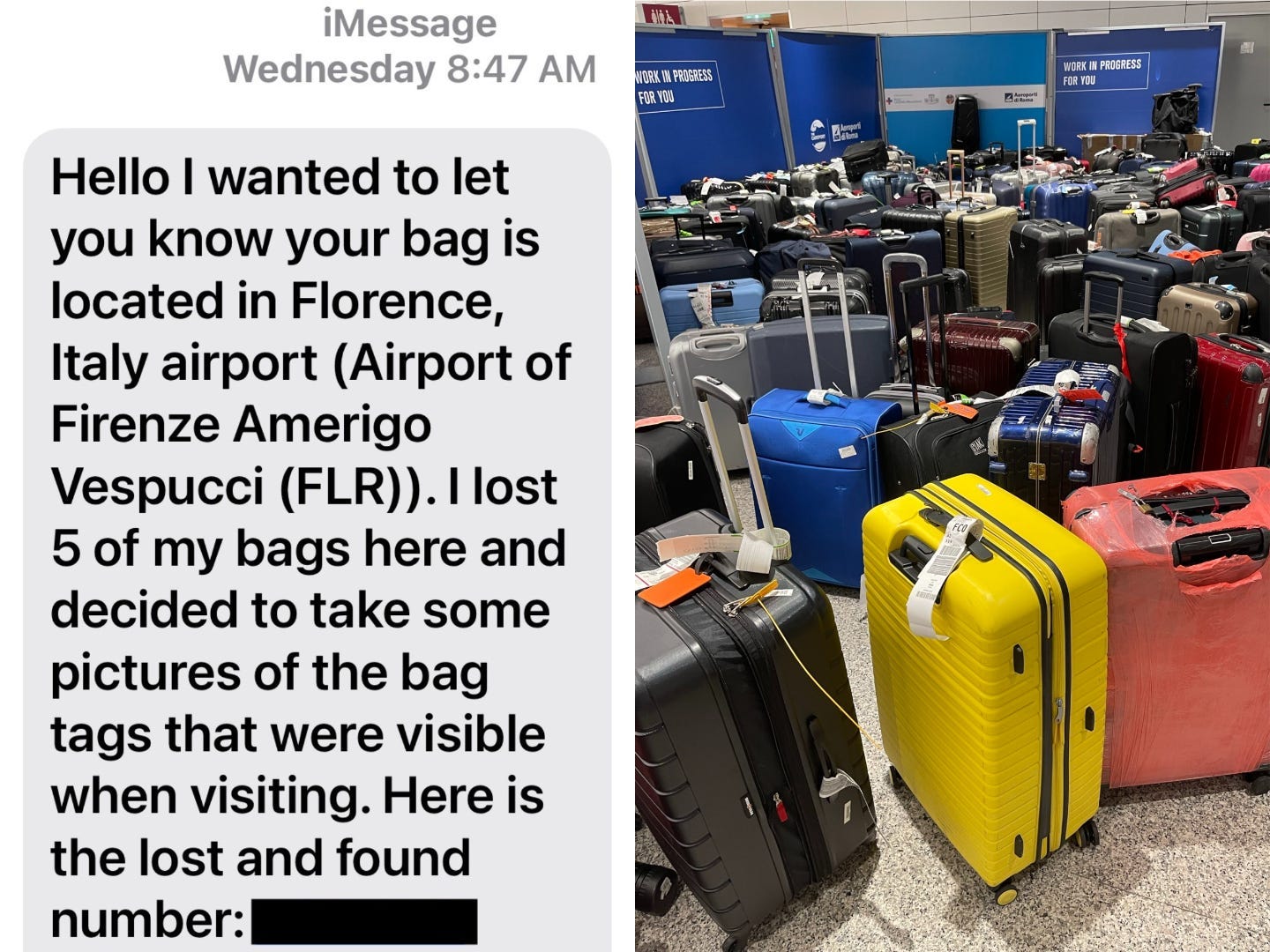 After thinking her bag was lost in the sea of luggage at Rome Airport (right), Lisa Khan got a text from a stranger staying she’d found it in Florence.

Lisa Khan and her family’s bags were lost on a transatlantic trip from Florida to Italy.
Five weeks after arriving in Italy, Khan got a text from a stranger saying she’d found Khan’s bag.
The bag was in Florence, an Italian city that Khan and her family had never been to.

A Lufthansa passenger who was forced to spend her cruise trip without her luggage after it was lost in transit found it when a stranger in a city she’d never visited stumbled upon it and texted her.

Six weeks after her flight, however, she still doesn’t have her bag back.

Lisa Khan flew Lufthansa to Italy with her husband, son, and daughter on June 30 for a two-night stay in the Tuscany region followed by a six-night Royal Caribbean cruise around Italy and Greece.

Their first flight from Orlando to Frankfurt, Germany was delayed, meaning they missed their connection to Rome, she said. They were switched to a flight to Florence instead, but this was canceled, Khan said.

Khan said that the family stood in line at Lufthansa customer services in Frankfurt for close to two hours.

The airline ultimately booked them onto an alternative flight to Rome later that day with its subsidiary Air Dolomiti, Khan said, but their bags didn’t make it.

The Khan family waited at Rome Airport, which was awash with luggage, to see if their bags showed up on the next flight.

After landing in Rome, Khan said the family waited for the next flight from Frankfurt to arrive in case their bags were on that plane, but ultimately gave up when they didn’t appear.

The family canceled their two-night stay in Tuscany, but still had to pay for their accommodation, and instead booked a hotel in Rome so they could wait for their bags, Khan said. She said that her son’s bag showed up, but none of the other three did.

“My husband spent the first two days of our vacation going back-and-forth from Rome city center to the airport,” Khan told Insider, adding that he was “constantly checking flight schedules and hardly slept.”

“Our $700 rental car meant to go to Tuscany and back was spent strictly on trying to retrieve luggage,” she said.

During their unplanned time in Rome, the family were in “limbo,” Khan said.

Khan and her family bought replacement clothes at The Gap.

“I was a little disheartened to be on this amazing cruise and going to places like Capri, Santorini, and Mykonos wearing shorts and a t-shirt from the Gap,” Khan said.

Her cruise line stayed in contact with Lufthansa to try coordinate their bags’ arrival at one of the ports, but this was ultimately unsuccessful, she said.

“It was not our best trip, because I just felt like this had a cloud hanging over, but we really tried to make the best of it,” Khan said.

On their way back, the family checked at Rome but their bags weren’t there, Khan said. A week after their return to the US, her daughter’s bag made it back to their house, she said – but the remaining two bags were nowhere to be seen. Her husband spent hours on hold to Lufthansa, she said.

Khan said her family tried to enjoy the cruise as much as they could.

On August 10 — more than five weeks after their flight — Khan got a message from a stranger who said she had stumbled across her bag at the airport in Florence. The stranger later found Khan’s husband’s bag, too.

“Hello I wanted to let you know your bag is located in Florence, Italy airport (Airport of Firenze Amerigo Vespucci (FLR)). I lost five of my bags here and decided to take some pictures of the bag tags that were visible when visiting,” the text message, seen by Insider, read.

Khan said she was confused about why their bags were in Florence as it was never part of their cruise itinerary, and she had never been to the city.

She said that her husband had even considered flying to Florence from the US to collect their bags. But he got in touch with someone from Air Dolomiti, who said she would make sure the airline sent the bags to the Khans.

“I confirm you that your luggage is in Florence, unfortunately together with hundreds of pieces of baggage,” an Air Dolomiti worker said in an email viewed by Insider. “We are doing our best to forward all the remaining bags to their owners as soon as possible.”

Khan said that on Tuesday Lufthansa told her husband that one of the bags had arrived at Washington Dulles International Airport via Munich and would be sent to Orlando with FedEx. Khan isn’t sure what happened to the other missing bag.

“It makes me laugh that this bag went from Orlando to Frankfurt to Florence to Munich to DC,” Khan said. “We were never in those last three cities.”

Lufthansa told Insider that it does not comment on “single baggage delays,” but added: “Due to the current staff shortages and because aircraft cannot wait indefinitely due to booked turnarounds, it may happen that baggage was not loaded in time and arrives late. In these cases, passengers are informed of the delay in a timely manner.”