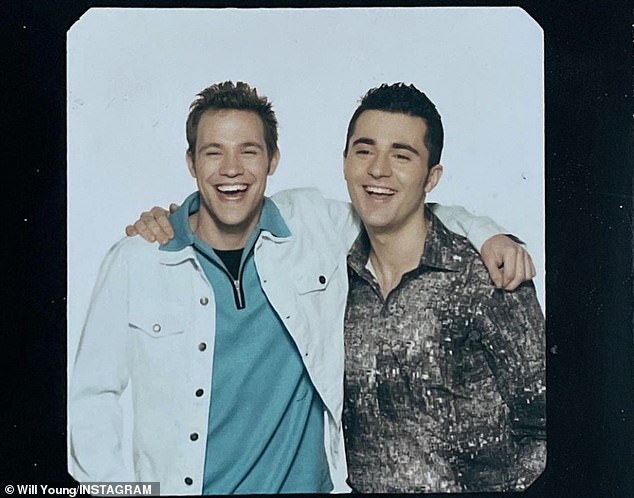 Will Young has paid tribute to the ‘driven, courageous and gentle’ Darius Campbell Danesh following the singer’s death at the age of 41 in Minnesota this week.

Darius was found unconscious on Aug. 11 in a room in the Berkman apartment complex across from the Mayo Clinic’s specialty treatment center in Rochester, where he had checked in under the name Morgan Brown.

Will, 43, admitted on Instagram on Friday that he needed some time to process the singer’s death after befriending him on the set of former talent show Pop Idol.

Fond memories: Will Young this week paid tribute to the ‘driven, courageous and gentle’ Darius Campbell Danesh after the singer’s death at age 41 in Minnesota

He shared a photo of himself next to Darius during their time on the show, writing, “For the past few days my thoughts have been and will continue to be with Darius’ family.

‘I found this photo taken a while ago during Pop Idol. If ever there was an example of not giving up on your dreams, Darius is at the top. Driven, courageous and gentle. My love goes to his family right now.”

Will and Darius rose to fame after appearing on Simon Cowell’s Pop Idol in 2001, the prototype for what would eventually become The X Factor.

Tragic: Darius was found unresponsive on Aug. 11 in a room in the Berkman apartment complex across from the Mayo Clinic’s specialty treatment center in Rochester

Will won the show, but both enjoyed successful recording careers before turning their attention to the stage.

Darius was booked into the hotel where he died under the name of his close friend Gerard Butler’s girlfriend, MailOnline revealed – as it turned out the Hollywood star visited him in the days before his death.

A source at the Berkman apartments told The Sun they saw Butler “a few times” in the area, adding: “I think he supported his friend.”

Exclusive: The Berkman, on display this week, is billed as Rochester’s “premiere address for elegant, short- and long-term furnished suites”

His death, at age 41, was announced by his family on Tuesday, but the cause remains unknown and it’s unclear if he was being treated at the Rochester, Minnesota medical facility.

Local police in Rochester said there were “no signs of intent or suspicious circumstances” and are awaiting toxicology results that could take up to two months.

The majority of those living in the condominium, which has approximately 270 long-term rentals and 75 short-term or nightly rentals, work or receive treatment at the Mayo Clinic’s Saint Mary’s Campus.

Devastated: The family of Scots Pop Idol contestant Darius Campbell Danesh can wait two months to find out the cause of his death. Pictured with his ex-wife Natasha Henstridge and her two sons

A police spokesperson said: “The investigation into the cause of death is still ongoing. There is no known threat to the public.’

A heartbreaking call from the police revealed the moment when the star stopped responding in the apartment building.

A close friend of Darius Campbell-Danesh paid tribute to the Pop Idol star today as she laid flowers at his childhood home in Glasgow.

Anne Ferguson said she had “no words” to describe her grief at the sudden death of the Scottish singer and actor.

Her famous hairdresser husband Taylor Ferguson had worked with Darius for two decades – and they met again and were photographed together in March this year when Darius visited his salon in Glasgow with showbiz friend Gerard Butler.

With tears streaming down her cheeks, Ms Ferguson told MailOnline today: ‘It’s just so awful. There are no words. I can’t describe how sad I feel.’

Ms Ferguson shared how she first became friends with Darius after her husband cut the young artist’s hair for his first Pop Idol performance.

She said: ‘My husband Taylor cut Darius’ hair just before he went on Pop Idol and we’ve been friends ever since.

“His number Colourblind became number one on the day of our son’s wedding, but Darius still found time to come to the wedding.

“Thursday we celebrated our son’s 20th wedding anniversary and played the tune of Darius again. I can’t believe he died that same day.

“I send all my love to his mommy and daddy and his brothers. It’s so sad.’

According to the Daily Record, Mr Ferguson said: “Devastated by the shocking news of the sudden passing of our dear friend Darius. Only 41. Our hearts are broken. We knew Darius from back in his Pop Idol days and he became a family friend.

“Last Thursday we celebrated our son and daughter-in-law’s 20th wedding anniversary. That date coincided with Darius’ 20th birthday getting his first number one with colorblindness.

“Indeed, Darius came to the wedding and all the guests toasted to his chart-topper – and of course we danced to the song.”

Rochester Police said it was responding to a “call from a deceased person” at 11:53 a.m. Aug. 11 at The Berkman, and the Southern Minnesota Regional Medical Investigation Agency identified the person as Darius.

According to reports, a dispatch call was placed when a ‘medical’ team was asked for a ‘possibly deceased’ person.

Minutes later, another call was reportedly made by an operator who said, “They don’t have to respond. We are waiting for RPD [Rochester Police Department] to arrive on site. We’ll secure the house.’

Close: Darius and ex-girlfriend Natasha Henstridge at a barbecue at The Project Beach House in Malibu, California, on August 9, 2008

Darius is said to be just weeks away from a reunion tour with his former Pop Idol co-stars, with sources close to him claiming he’d been “enthusiastic” for the homecoming and UK comeback trip.

Stars of the show from around the world, including Queen singer and American Idol winner Adam Lambert, would be invited back for Thames TV taping at the Criterion Theater in London’s West End. The sun.

The family of the Scots Pop Idol contestant can wait two months to find out the cause of his death.

Local police in Rochester said there were “no signs of intent or suspicious circumstances” and are awaiting toxicology results that could take up to two months.

Darius lived in the US and was in a relationship with Canadian actress Natasha Henstridge.