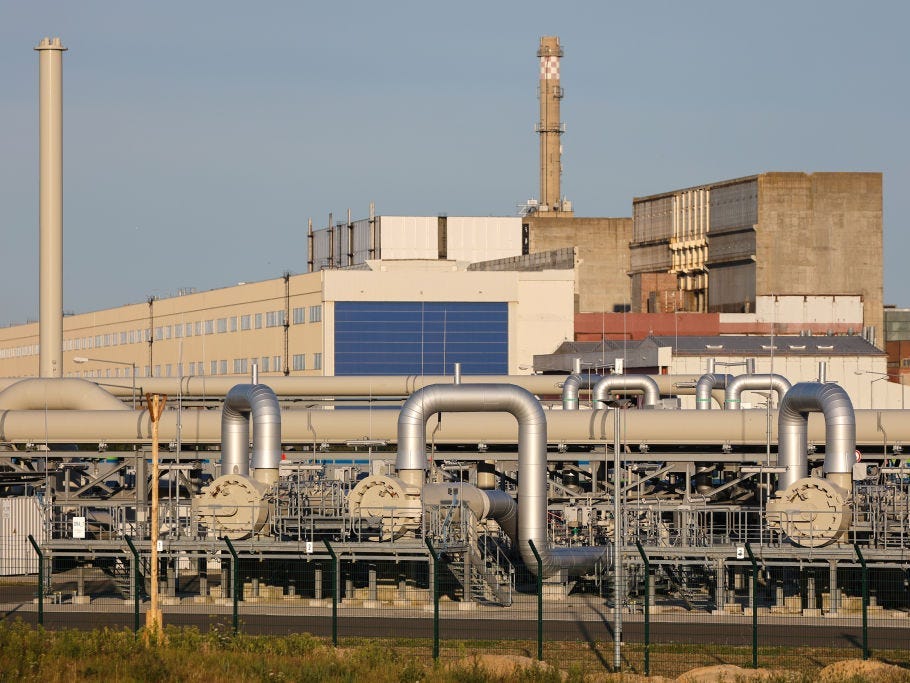 France will deliver 2% of Germany’s natural gas needs over winter.

France will restart a shuttered pipeline to send natural gas to energy-strapped Germany, Reuters reported.
The formerly east-west pipeline will deliver about 2% of Germany’s gas needs over the colder months.
Germany has scrambled to secure gas supply as Russia choked off flows via the key Nord Stream 1 pipeline.

France will reactivate an abandoned pipeline to send natural gas to Germany, which is scrambling to secure supplies for the winter after Russia choked off flows via a key pipeline.

The formerly east-west pipeline, based in France’s north east, will deliver 130 gigawatt hours per day of natural gas to Germany as part of a new energy deal, Reuters reported Wednesday.

That amounts to 20 terrawatt hours of gas over the colder months, roughly equivalent to 2% of the energy-strapped country’s needs.

“We do not expect that France will solve our gas problems. But every possible delivery of gas is a sign to the markets that we will pull through the winter,” a German government source said, per Reuters.

Europe is facing a “scary” energy crisis after Russia cut flows to the continent in retaliation for Western sanctions over the Ukraine war, but its biggest economy Germany is under huge pressure to secure supplies before the winter surge in demand.

It is particularly reliant on Russian natural gas, and it imported about half of its supply from there before the war in Ukraine broke out. Its winter storage was 80% full at last check, and it needs at least 90% to weather the season, according to the IEA.

On Friday, Russia’s state-energy giant Gazprom said its shutdown of the key Nord Stream 1 pipeline, which directly delivers gas from Russia to Germany, would be indefinite. Moscow has said it won’t resume flows until Western sanctions are lifted.

In return for France’s gas supplies, Germany will provide its neighbor with power if it runs short during the colder months, French leader Emanuel Macron has said. French utility giant EDF said this week it will restart its nuclear power plants for the winter energy crunch.

“Germany needs our gas, and we need power from the rest of Europe, notably Germany,” Macron said Monday.

On Monday, Germany’s economy minister said the country will keep two nuclear power stations open and on standby in case of an energy crisis — marking a U-turn in its plan to phase out the fuel source by the end of 2022.

Energy interruptions have put pressure on the major European economies. German lender Commerzbank has warned the country could face a 2009-style economic downturn and its economy could shrink 2.7% this year, in a worst-case scenario if Russia permanently shuts off natural gas supplies.